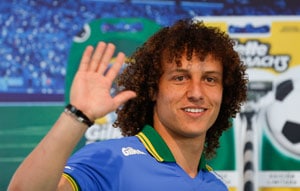 David Luiz is on the verge of joining Paris St Germain after Chelsea on Friday revealed they have agreed a deal to sell the Brazil defender to the French champions.

Luiz's move is reported to be worth a world record fee for a defender of £50 million ($84 million, 61 million euros) and the transfer will be rubber-stamped once he has agreed personal terms and passed a medical.

"Chelsea Football Club and Paris Saint-Germain have agreed terms for the transfer of David Luiz to the French club," a statement on Chelsea's website announced.

"The move is now subject to David Luiz agreeing personal terms with PSG and passing a medical examination."

PSG representatives are believed to have flown out to Brazil to complete Luiz's medical at the World Cup hosts' training base on Friday.

The French club's willingness to shatter the record for a defender was motivated by their desire to seal a deal before Barcelona or Bayern Munich could swoop for the centre-back.

PSG claim the formalities of the deal will be completed on June 10 to ensure Luiz can concentrate on the forthcoming World Cup.

A statement on the PSG website read: "Paris St Germain, Chelsea FC and David Luiz would like to confirm that they reached an agreement regarding the terms of an upcoming transfer of the Brazilian defender that would occur during the next transfer window which is to start on 10 June 2014.

"In accordance with the player's wish to prepare for and play in the World Cup in his home country in the best possible conditions, both clubs and David Luiz wished to reach an agreement as soon as possible between, on the one hand, Paris St Germain and Chelsea FC, and on the other, between the Parisian club and the player, in order to formalise the transfer as soon as the transfer window opens."

The hefty price convinced Chelsea to off-load Luiz, who was primarily used in a defensive midfield role by Blues manager Jose Mourinho after being unable to break up the central defensive partnership of John Terry and Gary Cahill.

Luiz, who joined the west Londoners from Benfica for £21.3 million in January 2011, made only 19 appearances in the Premier League this season, although he did help Chelsea eliminate PSG from the Champions League quarter-finals.

The 27-year-old's fee will beat the two previous highest fees for a defender, both paid by PSG for Marquinhos, who cost £30.1 million, and Thiago Silva, who arrived from AC Milan for £35.3 million

Meanwhile, the previous best deal received by an English club for a defender was when Rio Ferdinand left Leeds for Manchester United for £30 million 12 years ago.

The healthy profit Chelsea have made on Luiz's sale is likely to be reinvested in the squad, with Atletico Madrid striker Diego Costa reportedly Mourinho's number one target.

With Luiz on the way out after 143 appearances for Chelsea, Mourinho is likely to give more opportunities to highly-rated young defender Tomas Kalas, who impressed in the team's 2-0 win at Liverpool towards the end of the season.