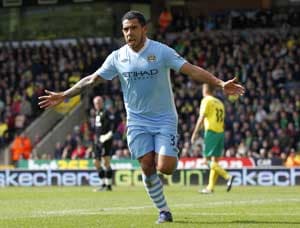 Roberto Mancini's side moved within two points of title rivals United thanks to a treble from Argentina forward Tevez, two goals from Sergio Aguero and an Adam Johnson strike.

United now need to beat Aston Villa at Old Trafford on Sunday to re-establish their five-point advantage at the top.

After City's defeat at Arsenal last weekend, it was widely expected that United would cruise to their 20th English league crown, but the champions' midweek stumble at Wigan and back-to-back wins featuring 10 goals for Mancini's men has breathed new life into the title race.

Mancini tried to keep the pressure on United when asked if the title was back in City's sights. "It's finished," he said.

He did admit that Tevez's absence for five months following the striker's touchline row with the City boss at Bayern Munich could be crucial.

"I think we did well without Carlos for four or five months, but I'm sure if we had Carlos with Sergio Aguero, Edin Dzeko and Mario Balotelli we would have scored more goals," Mancini added.

Norwich were swept aside before half-time as Tevez opened the scoring with a swerving shot from long-range that deceived goalkeeper John Ruddy in the 18th minute.

Tevez was instrumental in the second goal nine minutes later. Aguero played a pass to Tevez and the Argentine's deft back-heel allowed his compatriot to fire home from the edge of the area for his 27th goal of the season.

Tevez completed his treble in the 80th minute and Johnson clinched City's first away league win since February with a stoppage-time effort.