Burnley extended their unbeaten run in the Premier League to seven games as they climbed to ninth in the table. 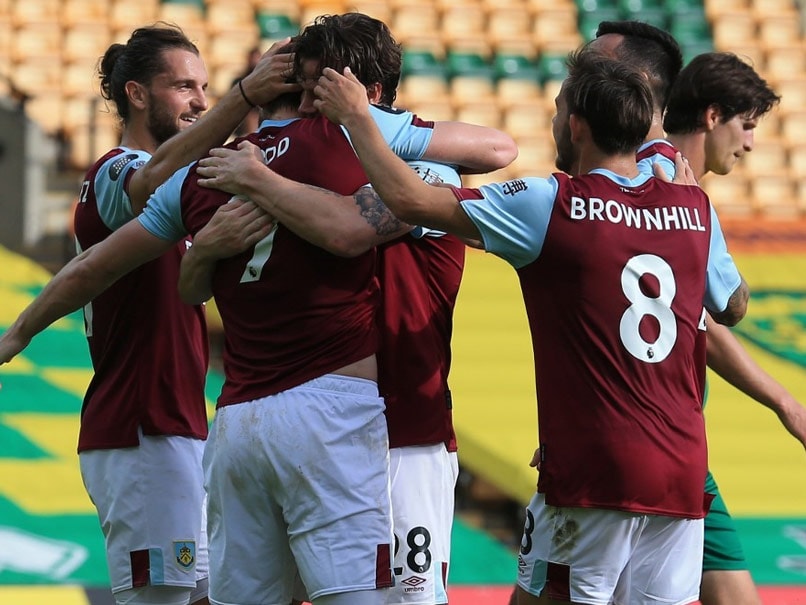 Burnley kept their bid for Europa League qualification alive with a 2-0 win over Norwich.© AFP

Burnley kept their bid for Europa League qualification alive as New Zealand striker Chris Wood inspired a 2-0 win over nine-man Norwich on Saturday. Wood struck in first-half stoppage-time at Carrow Road after Emiliano Buendia and Josip Drmic of relegated Norwich had been sent off. Ben Godfrey's late own goal extended Burnley's unbeaten Premier League run to seven games as they climbed to ninth. They are one point behind seventh-placed Tottenham in the race for a spot in next season's Europa League.

The odds are still against Sean Dyche's side as they have just one game left, while Tottenham, Sheffield United and Wolves all have two games to ensure they finish above the Clarets.

"I don't think I've played against a team with two sendings off. It was a bizarre game! We'll take the clean sheet and the win," Dyche said.

"To have 15 clean-sheets and the wins on the table is very pleasing so I'm delighted for the players."

Emphasising their supreme organisation under Dyche, Burnley keeper Nick Pope is in contention to win the Premier League's golden glove award for the most clean-sheets.

He leads with 15, while Manchester City's Ederson has 14.

In their last home game before they return to the Championship next season, following a record fifth relegation from the Premier League, Norwich hardly covered themselves in glory.

Daniel Farke's bottom-of-the-table team have lost their last 10 games in all competitions and this was an embarrassment.

The Canaries have failed to score in a league-high 19 games this season, including 11 of the past 13.

They are the first English top-flight side to lose five consecutive home matches without scoring since Birmingham in 1922.

"We walked into the trap and got two red cards. Naive, inexperienced, stupid, all the words are right. It's not acceptable," Farke said.

"We are sitting on position 20. You won't hear any excuse blaming the referee. My players walked into the trap."

The turning point came when Norwich were reduced to 10 men in the 35th minute as Argentine midfielder Buendia clashed with Ashley Westwood.

Buendia elbowed the Burnley midfielder in the back of the head after a collision between the pair.

Referee Kevin Friend watched a replay on the pitchside monitor before showing the red card.

In first-half stoppage-time, Norwich's season-long habit of shooting themselves in the foot resurfaced.

Drmic was sent off after lunging into a reckless studs-up foul on Erik Pieters, with VAR consulted to approve Friend's decision.

Norwich were the first team to have multiple players sent off in the first half of a Premier League game since Stoke in 2015.

A difficult day for Norwich got even worse moments later when Johann Gudmundsson's cross picked out Wood six yards from goal.

Wood launched himself into an overhead kick that crept past Tim Krul's despairing dive.

Krul was all that stood between Norwich and a thrashing as he denied Burnley several times in the second half.

But, summing up a season to forget for Norwich, Godfrey made a complete hash of clearing Pieters' cross and turned the ball into his own net in the 80th minute.

Norwich City Chris Wood English Premier League Football
Get the latest updates on IPL 2021, IPL Points Table , IPL Schedule 2021 , live score . Like us on Facebook or follow us on Twitter for more sports updates. You can also download the NDTV Cricket app for Android or iOS.