Jones has made 10 appearances so far this season, by far his best run in the side having amassed a total of just 14 since joining from Middlesbrough in 2010. 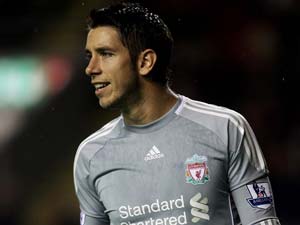 Liverpool's Australian goalkeeper Brad Jones admits he was relieved to sign a new contract with the Premier League club on Thursday after battling to prove his worth to Reds manager Brendan Rodgers.

Jones was facing a bleak future at Anfield when Rodgers announced his arrival at the club in June by telling the 30-year-old that he wasn't part of his first-team plans.

But despite being linked with a host of goalkeepers in the following months, Rodgers has been impressed by Jones's displays in the absence of injured first-choice Jose Reina and rewarded the Australian with a new deal of unspecified length.

"When he (Rodgers) came in I don't think he was too sure about whether I was going to stay or not and I had to prove to him I was worthy of being here," Jones said.

"He was very honest with me at the start and said maybe things weren't going to work out.

"But he was then just as honest to come and say to me I'd done well and proved myself to him.

"That's what you want from your manager - somebody that's honest, that you can talk to and is going to help you progress as a player.

"He's a big influence. He's a very positive guy and somebody that wants to be amongst the players, talking to them and making sure they know what he wants.

"I'm happy to stay on and happy the club have been supportive with me and I've seen enough to want to keep me here longer."

Jones has made 10 appearances so far this season, by far his best run in the side having amassed a total of just 14 since joining from Middlesbrough in 2010.

And, although Reina is likely to remain Rodgers' first choice 'keeper, Jones hopes to be part of a successful side over the coming years.

"Some people rate you more than others and I think I've found that in my time here at Liverpool. Some managers have thought more of me than others," he added.

"I said when I signed here it was a dream come true. It was something I'd wanted as a young boy and that hasn't changed.

"I want to stay here as long as I can. At the minute, the club is on a progression and we're improving a lot.

"It's a good time to be here and I'm sure in the next couple of years I'll be part of a successful squad."