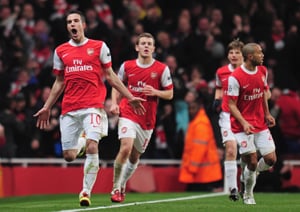 North London rivals Arsenal and Tottenham Hotspur have released a joint statement warning supporters to behave during Saturday's derby at the Emirates Stadium.

With passions likely to run high again in Saturday's lunch-time fixture, the two clubs have warned their fans to be on their best behaviour.

"All fans should be aware that breaches of stadium regulations -- including anti-social behaviour -- will not be tolerated," read a statement published on the websites of both clubs on Friday.

"Arsenal and Tottenham do not tolerate discrimination of any sort, whether it be on the pitch or in the stands.

"Both clubs are actively encouraging all fans to focus on getting behind their team and enjoying what promises to be a great match on Saturday."

Tottenham have also warned their supporters that offensive banners will be confiscated upon entry to Arsenal's stadium.

"It is common policy and normal ground rules at football stadia in the UK and elsewhere in Europe that flags of an overtly religious/sectarian/political nature will not be permitted and may be confiscated -- please respect this request," wrote the club.

Comments
Topics mentioned in this article
Football Arsenal Manchester City Alex Ferguson Mark Hughes Tottenham Hotspur English Premier League
Get the latest Cricket news, check out the India cricket schedule, Cricket live score . Like us on Facebook or follow us on Twitter for more sports updates. You can also download the NDTV Cricket app for Android or iOS.