Arsenal ended Liverpool's bid to set a new Premier League points record with a 2-1 win over the champions, while Manchester City pushed Bournemouth closer to relegation with a 2-1 victory on Wednesday. 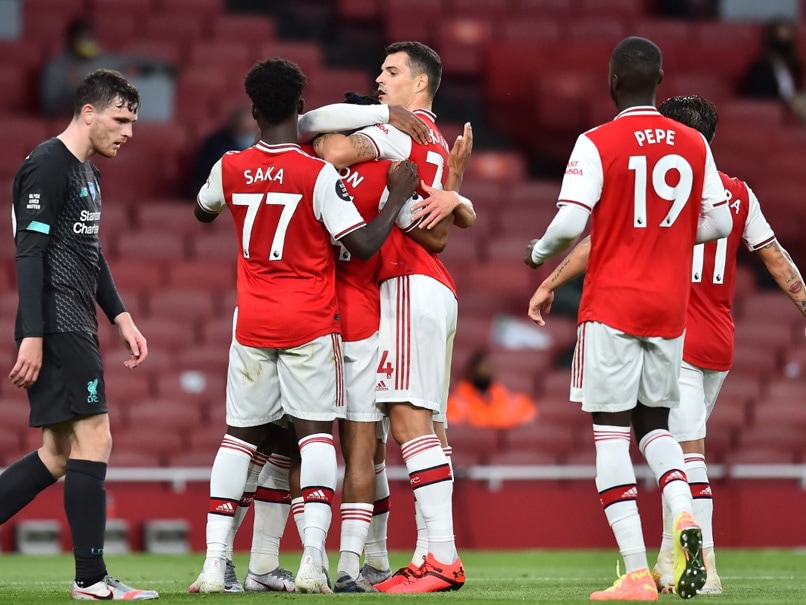 Arsenal climb to ninth place as they chase qualification for the Europa League.© AFP

Arsenalended Liverpool's bid to set a new Premier League points record with a 2-1 win over the champions, while Manchester City pushed Bournemouth closer to relegation with a 2-1 victory on Wednesday. Jurgen Klopp's sideneeded to win their final three games of the season to break Manchester City's record of 100 points set in 2018. They were on course when Sadio Mane opened the scoring with a clinical finish from Andrew Robertson's cross at the Emirates Stadium. But two careless mistakes condemned Liverpool to a third league defeat this season.

Alisson was guilty of an equally costly blunder when his pass out was intercepted by Lacazette and he picked out 20-year-old Reiss Nelson for a cool close-range finish.

Liverpool have failed to win three of their five matches since clinching the title.

They have 93 points and with just two games left and can only reach 99 at the end of their first title-winning campaign for 30 years.

"Twice there was a massive lack of concentration. We took a break after 1-0. Those two moments killed the game for us," Klopp said.

"You can't win games when you concede chances like that. We have to learn from it, 100 per cent."

Arsenal climb to ninth place as they chase qualification for the Europa League.

"In terms of energy and happiness in the dressing room before the semi-final, it's a good medicine," Arteta said.

"To beat this team you have to have moments in the game when you take your chances, defend and have a bit of luck."

Manchester City had enjoyed a big win off the field already this week with their appeal to the Court of Arbitration for Sport overturning a two-season ban from playing in European competitions, freeing up Pep Guardiola's men to play in the Champions League next season.

Guardiola left Aymeric Laporte, Kevin De Bruyne, Raheem Sterling and Riyad Mahrez on the bench against Bournemouth to keep them fresh for Wembley, but City still had too much quality in the form of David Silva and Gabriel Jesus.

Silva showed why he will be so missed when he leaves at the end of the season, the midfielder curling a free-kick in off the underside of the crossbar after six minutes.

Jesus was ruthless in the 39th minute as he wriggled between two weak Bournemouth challenges before firing into the far corner to score for the third consecutive game.

"It was a really difficult game. We started well in the first 10 or 15 minutes of the second half but then we had a problem in our build-up," Guardiola said.

Defeat leaves Bournemouth still three points adrift of safety from Watford and West Ham, who face each other on Friday.

It was not until 14 minutes from time that the visitors broke the deadlock thanks to Raul Jimenez's stunning strike on the half-volley.

In stoppage-time, Mike Dean pointed to the spot for a handball by Matt Doherty despite the Irishman seemingly being impeded by Wood's attempt at an overhead kick.

Tottenham won 3-1 at Newcastle to keep their chances of European football next season on track by moving up to seventh.

Matt Ritchie got Newcastle's equaliser, but Harry Kane restored Tottenham's lead and the England captain added his second in the final minute.

Bournemouth English Premier League Football
Get the latest updates on ICC Women's Cricket World Cup 2022 and IPL 2022, check out the Schedule , Live Score and IPL Points Table. Like us on Facebook or follow us on Twitter for more sports updates. You can also download the NDTV Cricket app for Android or iOS.