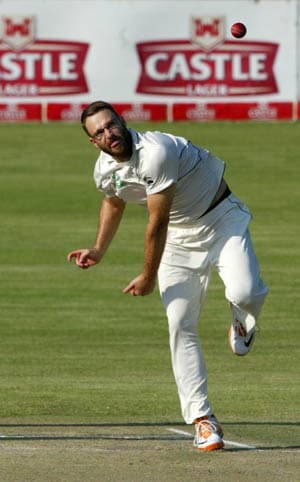 In the past few years, cricket in Zimbabwe has been through its lowest ebb with the team increasingly relying on its spinners to provide breakthroughs as compared to the heydays when Eddo Brandes and Heath Streak used to form the strike partners. However, with lack of quality cricketers coming up and the mass exodus of existing players, players like Chris Mpofu have featured for Zimbabwe on a far more consistent basis than they would have under normal circumstances.

A tall speedster, Mpofu at mid-120 kph has a pedestrian pace for most international batsmen. However, his ability to hit the deck hard and swing the ball away from right-handers has resulted in him being Zimbabwe’s new ball bowler in ODIs. The Plumtree-born youngster made his Test and ODI debut way back in 2004 but until 2010, had played in less than 50 ODIs, a testament to both his inconsistency and Zimbabwe’s lack of international cricket. But he has had some memorable moments along the way, having scalped five wickets on Test debut and has also come up with a few notable performances against weaker teams in ODIs.