Mohammad Shami posted a picture of him trying to outrun his dog as he worked on his fitness during the lockdown period. 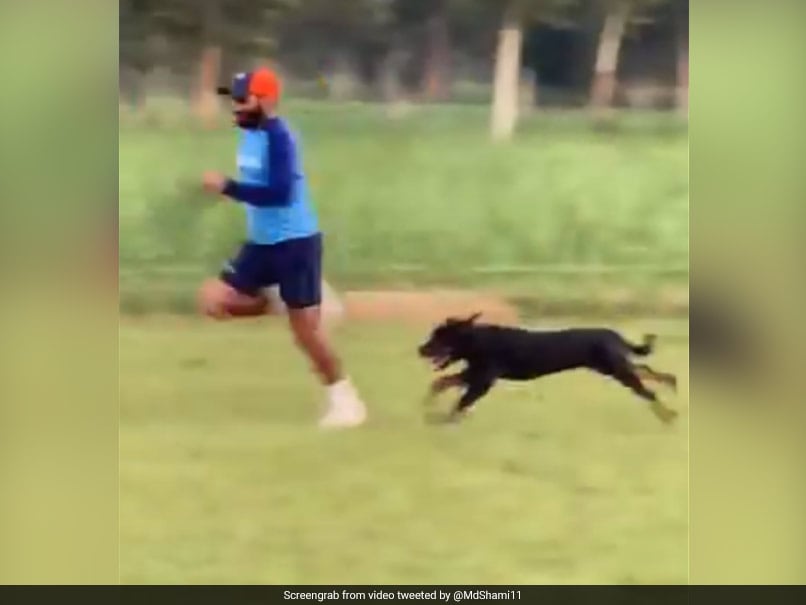 Mohammed Shami shared a video of himself sprinting alongside his pet dog.© Twitter

Mohammed Shami, who is an integral part of India's fast bowling attack, has been posting videos on social media, sharing his workout regime with his followers during this coronavirus-enforced break. Shami on Friday took to Instagram to share another video where he trained to improve his speed with the help of his pet dog. In his latest video, Shami can be seen sprinting alongside his pet dog. For the majority of the sprint Shami was ahead of his dog but towards the end, the dog picks up some pace and they both seem to finish the race, fractionally apart from each other. "Speed work with jack," Shami captioned the video.

Mohammed Shami is an important part of India's pace-attack across formats and he has been training hard to keep himself fit and ready for whenever cricket resumes in the future.

Like most of the cricketers, Shami is also spending time at home during the coronavirus break. Recently he shared a video of himself resuming his bowling training at a ground near his home.

Apart from his daily training, the fast bowler has conducted several Instagram live sessions with his fellow teammates. Besides that,Shami has also distributing food and masksto help those in need during these difficult times.

Sharing a video of Shami's work earlier, the Board of Control for Cricket in India (BCCI) tweeted: "As #IndiaFightsCorona, @MdShami11 comes forward to help people trying to reach home by distributing food packets & masks on National Highway No. 24 in Uttar Pradesh. He has also set up food distribution centres near his house in Sahaspur".

Shami has also shared his opinion about the International Cricket Council's (ICC) decision to ban the use of saliva to shine a cricket ball.

While most fast bowlers are of the opinion that the prohibition will affect them adversely, Shami, during an Instagram live session with Rohit Juglan, said that he will still be able to produce reverse-swing, provided the shine of the ball is maintained properly.