Australia Were Clueless About Me And Hanuma Vihari In Sydney, Believes Ravichandran Ashwin

Australia vs India: Ravichandran Ashwin and Hanuma Vihari defeated fatigue and injuries to help the visitors draw the Test match, at the Sydney Cricket Ground. 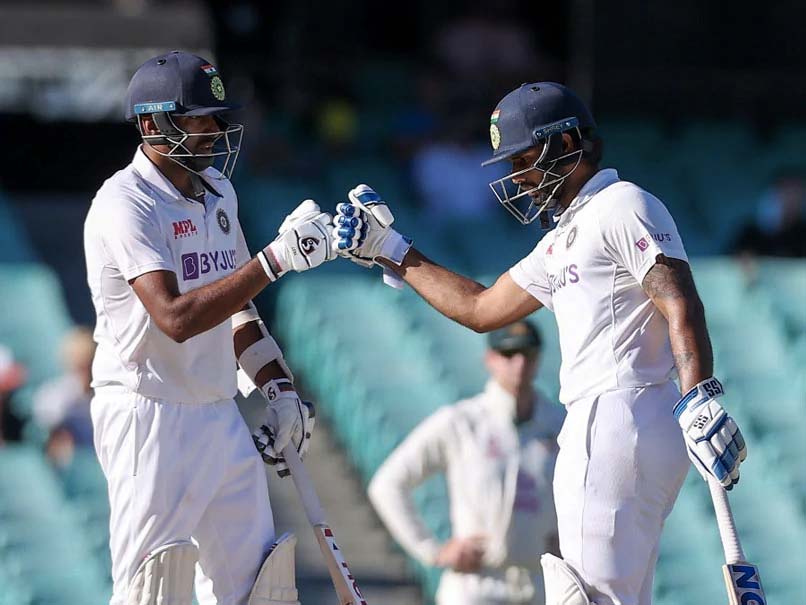 Hanuma Vihari and Ravichandran Ashwin during the 3rd Test match in Sydney.© AFP

Off-spinner Ravichandran Ashwin has said that the Australian tactics during the Sydney Test seemed like they were not able to realise what the bowling all-rounder and Hanuma Vihari were trying to do in that match. Batting out 258 balls with a fierce home team throwing everything it had up its sleeves is no mean feat. But the Indian duo of Vihari and Ashwin stood ground and managed to do just that as they eked out a draw in what was nothing short of an action-packed fifth day in the third Test between India and Australia at the Sydney Cricket Ground.

"Australia's tactics during the fourth innings of the SCG Test really made me curious. Their tactics looked like Australia did not realise what we were doing. They must have thought that we guys were not rotating strike because of injury, but the main reason was one guy cannot move his foot forward and the other one was getting body blows, and then suddenly, it became our strategy," Ashwin told fielding coach R Sridhar on his YouTube channel.

"Then, what happened was, my back became stiff and I could not move. They made a mistake. If they had pitched it up to me, I might have edged or found it difficult, I feel. They thought to scare us off by hitting us everywhere by bouncing. It worked counterproductively. The more beaten I got, the more resolve I got. What more is left to be thrown at me? I got an inner resolve. Add to this, Tim Paine started banter as well. You can take it as you want, but at that point, Vihari and I thought that Australia has lost it," he added.

Paine's efforts to throw Ravichandran Ashwin off-guard failed terribly on the final day of the third Test at the Sydney Cricket Ground as the off-spinner had the perfect comeback in store. Unable to take wickets, Australia skipper Paine was trying his best to distract Ashwin and he was caught on stump mic as saying: "Can't wait for you to reach Gabba, Ash." To this, Ashwin immediately responded: "Can't wait for you to come to India as well, that would be your last series."

A hamstring injury notwithstanding, Vihari hit an unbeaten 161-ball 23 while Ashwin hit 39 off 128 balls as the two defended away any hopes Australia had of registering a win. Fielding coach R Sridhar also said that it seemed like the Indian team got together as one unit on the final day of the SCG Test.

"Indian team's togetherness, I saw that happen on day five of SCG Test. One of the most enthralling days of Test cricket. I have been around since 2014. Unbelievable. Like Ravi Shastri said, rest assured of a heart attack when Rishabh Pant bats. Heart attack for everyone, spectator, our team, their team. I have a question, who gets more tense when Rishabh Pant bats? Is it the opposition or his own team? But boy that was some knock from him at SCG. He defended 27 out of his first 35 balls, but after that, he exploded," said Sridhar.

On Tuesday, Australia's fortress -- The Gabba -- was finally breached. It took 32 years and two months, but the unthinkable was achieved as an injury-ravaged young Indian team beat Australia by three wickets against all odds in the final Test to take the series 2-1.

Ravichandran Ashwin Hanuma Vihari Australia vs India 2020-21 Australia vs India, 3rd Test Cricket
Get the latest updates on IPL 2021, check out the IPL 2021 Schedule and Indian Premier League Live Score . Like us on Facebook or follow us on Twitter for more sports updates. You can also download the NDTV Cricket app for Android or iOS.