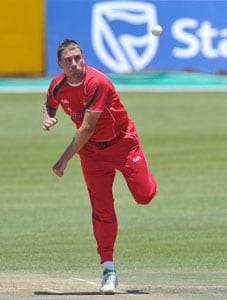 This Zimbabwean bowler was contracted with meningitis when he was just a few months old, a disease which not only resulted in complete deafness but left him with terrible co-ordination difficulties. It was a blow which would leave anyone shattered but such was Ray Price's determination that he didn't allow disabilities to hamper his cricketing passion.

The left-arm spinner who started playing for Mashonaland Country Districts in the 1995-96 season made his international debut in late 1999 against Sri Lanka. However, failing to impress in his debut Test, he was dropped from the side. Two years later, he made a fine return with seven wickets in his comeback Test against Bangladesh. The talent was evident, but with Paul Strang being the established spinner in the side, Price continued to remain in and out of the side.

However, the spinner slowly began to come into his own and it was evident against South Africa and India in 2002, where he was Zimbabwe's standout bowler. His impressive Test form saw him making his mark in ODIs but despite being economical, he failed to replicate his Test form in the ODI arena. With six wickets against a world class Australian side in a Test in 2003 and sensational 2004 West Indies tour where he picked up 19 wickets in just two Tests, Price seemed to be on the path of greatness.

Price was increasingly disillusioned with the politics in Zimbabwe cricket, and he decided to become part of player rebellion which resulted in his ostracizing from the team. In the following years, he played in England with Worcestershire but in late 2007, finally returned to his roots and overtime became one of Zimbabwe's most prolific bowlers in the ODI format. Price wasn't a huge turner of the cricket ball but it was his clever thinking and subtle variations of pace and flight which devoured most batsman. Ray Price then went into an exile before coming back strongly in 2009, picking up 44 wickets in the year. Later on in 2011, he was picked up by Mumbai in the Indian T20 league and became only the second Zimbabwean to play in that lucrative league, after Tatenda Taibu. He did go on to play Test matches against Pakistan,New Zealand and Bangladesh later on but lacked his original spite. Eventually after constant struggles, Ray Price retired in 2013, just before the ODI series at home against India.