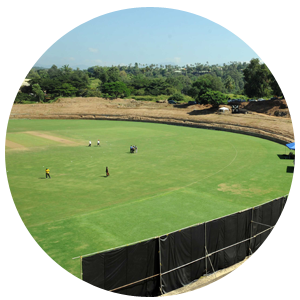 With a capacity of 35,000 the Pallekele International Stadium in Kandy was established in the year 2009. One of the newest stadiums in Sri Lanka, this ground was specially built to replace the Asgiriya Stadium which hosted Test matches from 1983 to 2007.

Pallekele hosted its first Test in 2010, played between Sri Lanka and Pakistan, following which ODIs were hosted from the 2011 ICC Cricket World Cup. Along with being the home ground for the Sri Lankan national side, it also hosts the Kandurata domestic team. The stadium is also one of the grounds to host matches from the 2012 ICC World Twenty20.

It was at this very venue that Sri Lanka’s Suranga Lakmal joined the likes of Kapil Dev and Imran Khan in becoming the third bowler to take a Test wicket off the first ball at a new venue.