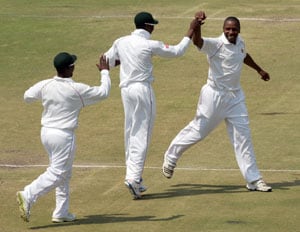 A tall, lanky fast bowling all-rounder, Tinashe Panyangara shocked the Australians as he his six wickets helped Zimbabwe register a surprise win against them in the 2003-04 Under-19 World Cup.

Panyangara is known for his smooth bowling action and accuracy, as well as his usefulness as a right-handed batsman. He was yet to develop as a professional cricketer, but was surprisingly fast tracked into the national team following the sacking of 15 rebel Zimbabwean players. It then led to his debut in ODIs and Tests in 2004 against the touring Sri Lankan side. A stress fracture in 2005 halted his progress for a long time, before he made his return to the squad in 2011. Panyangara is a passionate cricketer, and his all-round abilities make him a vital cog in Zimbabwe's cricketing future.