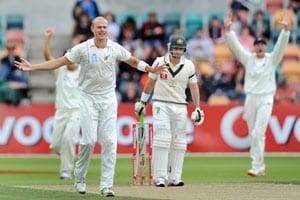 A man who has all the ingredients of a quality pace bowler, Chris Martin uses his strength and height to a good effect, hitting the deck hard and deriving some steep bounce. Known more for his fragility with the bat, this speedster from Christchurch has been the crux of the Kiwi pace attack for a substantial period of time. Martin got his first taste of international cricket in the year 2000 in a Test match against South Africa. His talent was unravelled immediately as he struck three lusty blows picking up the wickets of Kirsten, McKenzie and Pollock. He picked up his first 5-wicket haul against Zimbabwe in a Test at Wellington in 2000. A series of injuries kept Bond out of the side and elevated Martin as the No.1 choice for the Kiwi pace department. Martin did not waste this chance and stepped into Bond’s boots with stern authority, grabbing 11 wickets at Auckland in a Test against South Africa in 2004.

The Kiwi pacer enjoyed a few good seasons and replaced Daryl Tuffey in the 2007 World Cup. However, he could not maintain his form and what followed was a string of fruitless performances. The 2009-10 season was quite morose for the speedster as he picked up just 16 wickets in six Tests. His 4 for 41 against Zimbabwe-A in October 2010 re-established his position in the Test squad and confirmed his selection as the mainstream fast bowler for a tour to India.

A tall, angular fast-medium bowler, Martin’s assets are his accuracy and placid seam, and he hardly relies on speed or swing. His clumsy batting has often been the highlight, which has also resulted in him making more Test ducks than any other New Zealander.