Listen to the latest songs, only on JioSaavn.com
Olympics 2012
Sports Home

It began as a glorious late summer's day - clear blue sky, shorts and shirt-sleeve kind of weather. Sunlight twinkled off the acrylic glass at the Olympic stadium. Tourists lounged beneath the umbrellas of outdoor cafes, chatting and sipping beer.

The scene in Munich's Olympic Park on September 5, 1972, was idyllic - except for a helicopter from the German border police circling over buildings of the nearby village where the athletes lived.

If you shaded your eyes, squinted against the blinding sunlight and knew where to look, you could just make out the images of armed uniformed German police standing on the buildings. Turn away and the horror of what was unfolding seemed to disappear. 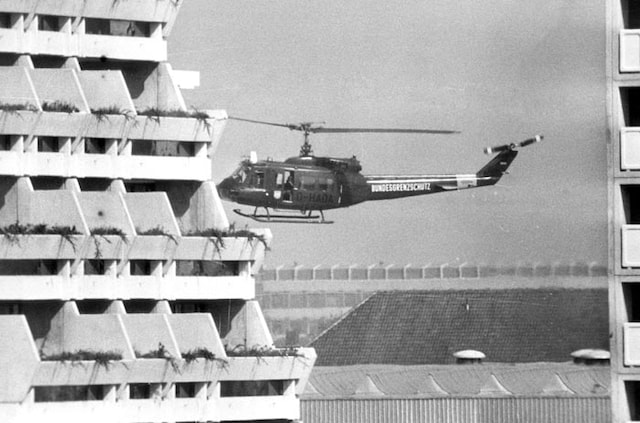 It began as a glorious late summer's day - clear blue sky, shorts and shirt-sleeve kind of weather. Sunlight twinkled off the acrylic glass at the Olympic stadium. Tourists lounged beneath the umbrellas of outdoor cafes, chatting and sipping beer.

The scene in Munich's Olympic Park on September 5, 1972, was idyllic - except for a helicopter from the German border police circling over buildings of the nearby village where the athletes lived.

If you shaded your eyes, squinted against the blinding sunlight and knew where to look, you could just make out the images of armed uniformed German police standing on the buildings. Turn away and the horror of what was unfolding seemed to disappear. (AP Photo) 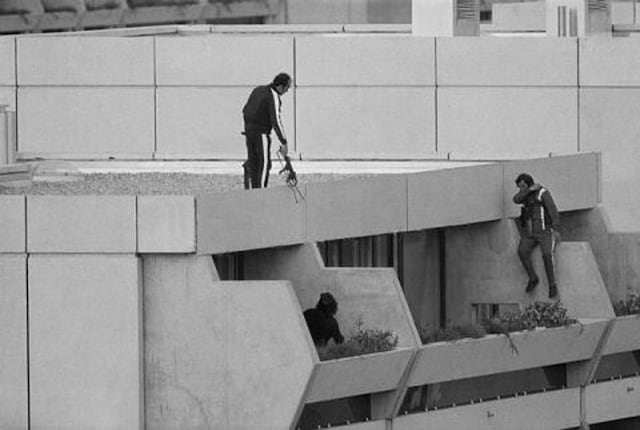 Forty years later, the stark images of what became known as the Munich Massacre remain seared in the memory.

Eight Palestinian gunmen from the Black September organization had broken into the Olympic Village. There they seized 11 Israeli athletes, coaches and officials in their apartments.

Two of the hostages were slain in the first moments. By the end of the day, the nine other Israeli hostages and all but three of the gunmen would be dead. The stain of that terrible day would remain for decades - on the city of Munich, on German officials and on the Olympic movement's leadership, which tried to downplay the tragedy.

Tens of thousands of people had come to Munich that day to take part in what the Germans had advertised as the "friendly Olympics." 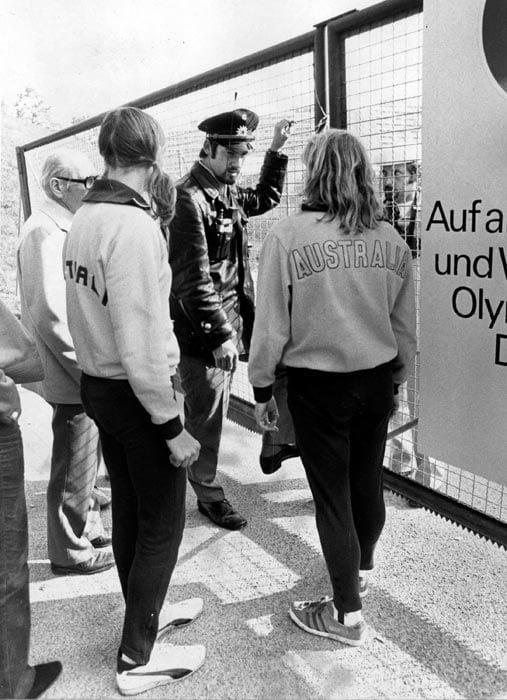 Despite the tension around the building where the hostages were being held, everywhere else things seemed pretty normal. At the Olympic Park, there were no security checkpoints, no looks of fear or apprehension among the crowd and no sense of alarm - except around the athletes' quarters. And those were off limits to spectators anyway.

A few policemen ambled among the crowds. But there were no signs of the extra security that today, in the post-9/11 world, is standard and expected.In an era before the Internet, before smartphones and before 24-hour news cycles, there was little tension in the air. No one was huddling over a radio trying to follow events. The only sign of trouble, apart from that helicopter and armed police on the rooftop, was a bold-faced headline on a German tabloid that screamed: "Geiselnahme," or "Hostage Taking." (AP Photo) 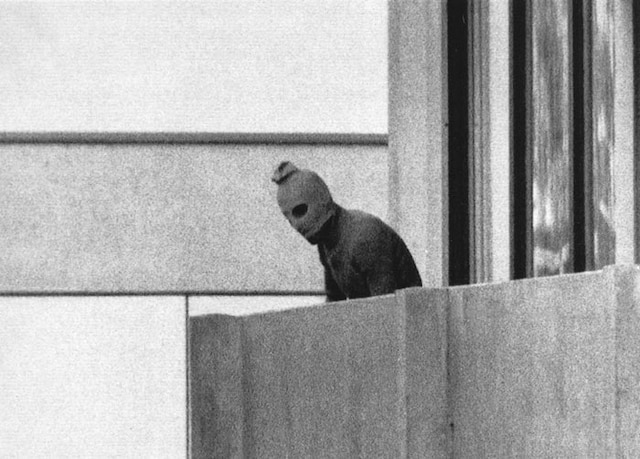 But for people who didn't know German, it was hard to find a clue that anything was wrong. And that's the way the chairman of the International Olympic Committee, Avery Brundage, wanted it. The 84-year-old philanthropist and art collector resisted calls to suspend the games and hoped the German authorities could resolve the crisis quickly and without more bloodshed. As hours passed with no resolution, the party outside the Olympic Village rolled on.

Coming less than 30 years after World War II ended, the choice of Munich as a venue had been controversial from the outset. More than most German cities, Munich had been closely associated with the rise of the Nazi Party. The first concentration camp, Dachau, was located on Munich's outskirts, and the Israeli team had visited the site just before the opening ceremony. (AP Photo) 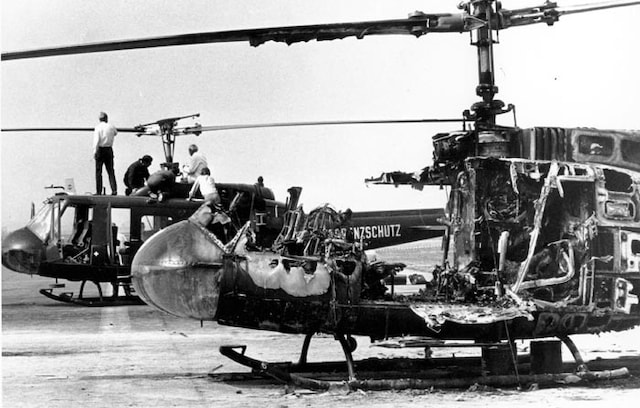 It was the first time Germany had hosted the Summer Games since 1936 Olympics in Berlin, which were presided over by a confident and increasingly menacing Adolf Hitler. Hoping for redemption, the Germans had promoted a relaxed and friendly atmosphere. Now, the image of Jewish athletes with their lives at risk threatened to destroy all that.

Hours later in the distance, toward Fuerstenfeldbruck air base, there were flashes of light. It was assumed to be heat lightning. The Germans persuaded the gunmen to fly with their hostages by helicopter to the air base, where they would board a plane to an Arab country. Instead, the Germans had laid an ambush. Five German snipers lay in wait around the tarmac. In the darkness, the snipers failed to kill their targets. The gunmen fired back. One of them tossed a grenade into the helicopter where some of the hostages were bound and blindfolded. The other Israelis were raked with machine gun fire. Five of the Palestinians died in the gun battle; three were captured alive. Brundage refused to cancel the rest of the games. Hungary beat Germany 4-1 and went on to claim the silver medal. Jewish athletes from other countries were evacuated for their own security. (AP Photo) 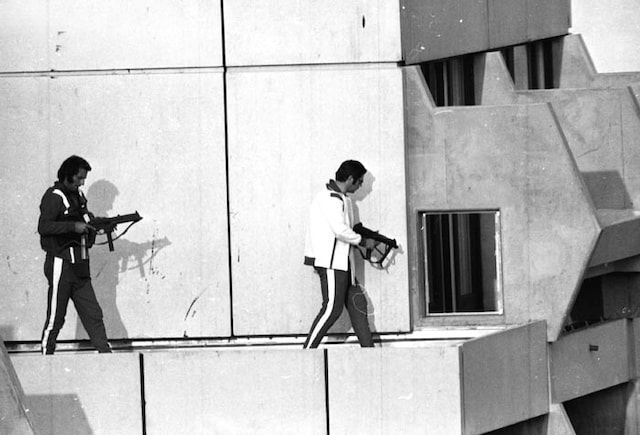 Athletically, there was much to remember about the 1972 Summer Games: American swimmer Mark Spitz's record seven gold medals; the emergence of Soviet gymnast Olga Korbut on the world stage; Frank Shorter becoming the first American to win the Olympic marathon in 64 years; and a controversial 50-49 loss by the Americans to the Soviets in basketball.

Instead the 1972 Summer Games will always be remembered as "the Munich Massacre."

Less than two months after the killings, the three surviving gunmen were released and flown to Libya in exchange for the passengers and crew of a Lufthansa flight hijacked in the Middle East.

The Israelis, meanwhile, were organizing Operation Wrath of God, which tracked down and assassinated dozens of Palestinian militants linked to the killing, including two of the three surviving hostage takers. The third, Jamal al-Gashey, eluded the dragnet and remains at large today. He is believed to be hiding in either North Africa or Syria.

Suspected Israeli agents did manage to track down the self-proclaimed mastermind, Abu Daoud. He was cornered in a Warsaw hotel in 1981 and shot 13 times. He managed to survive, and died nearly 30 years later of kidney disease in Syria. (AP Photo) 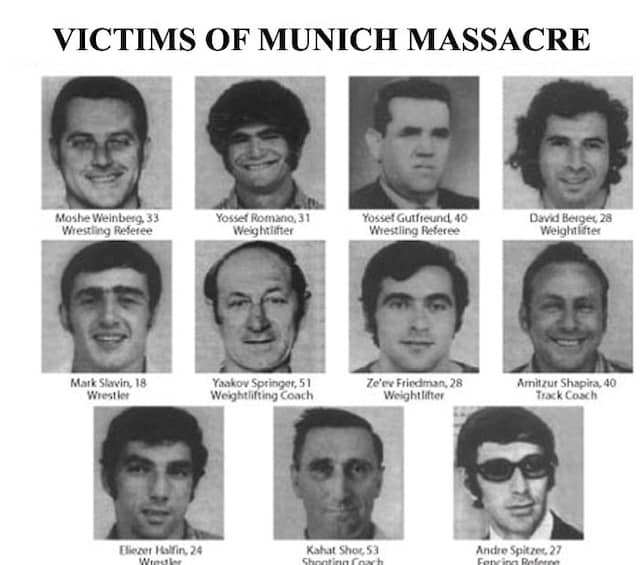 For the Olympic movement itself, the events of September 5, 1972, were a jarring reminder that, despite the dreams of its founders, international sport cannot be separated from global politics.

Four decades later, security has become as integral a part of the games as the athletes, spectators and media. The British expect to spend more than $1.6 billion to protect this summer's games, roughly what the Greeks spent in Athens in 2004 and the Chinese in Beijing in 2008.

All the legacy of the Munich Massacre, a long-ago day that changed the Olympic Games forever.