Darren Bravo and Kraigg Brathwaite put up an unbeaten 51-run partnership to ensure West Indies ended an eventful 4th Day of the final Test against India, on 81/2 with a lead of 189. 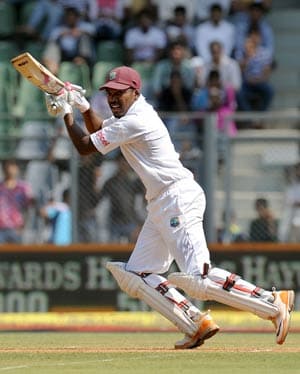 Darren Bravo and Kraigg Brathwaite put up an unbeaten 51-run partnership to ensure West Indies ended an eventful 4th Day of the final Test against India, on 81/2 with a lead of 189.

There was a century at the Wankhede Stadium, but not the one the sell-out crowd came to see. Sachin Tendulkar missed his historic ton by six runs, but the fans at least had the consolation of watching R Ashwin conjure an energetic hundred to become the first Indian since 1962 to take five wickets and score a century in the same innings.

When Ashwin walked out, India were facing the possibility of a humiliating follow-on on the flattest of tracks after the West Indies' quicks struck three times with the second new ball, but with the help of Virat Kohli, he sliced the deficit to a far more manageable 108.

In recent times, West Indies' batting has rarely shown the ability to put up strong performances in both innings of a Test, but the all-too-familiar collapse didn't occur in the final session as Darren Bravo and Kraigg Brathwaite steadfastly hung on against the spinners.

West Indies' fast bowlers began the day with intent - Ravi Rampaul starting with a bouncer to Tendulkar and Fidel Edwards striking with his first delivery of the day, getting VVS Laxman to edge to gully.

It was all about Tendulkar for the next half an hour though, as he galloped to the nineties with a series of sumptuous strokes. The classic straight drive, an effortless punch past cover, an audacious upper cut over third man for six all suggested Tendulkar was in top form, turning the Wankhede into a buzzing cauldron of noise. Ravi Rampaul switched the mute-button on though, by getting a short-of-length ball to jump at Tendulkar, who edged it to Darren Sammy at second slip. The seemingly interminable wait continues.

The crowd was at its most dejected then, and their mood didn't improve when MS Dhoni was bowled by Sammy soon after. With only the inexperienced Kohli and the bowlers to come, and India needing 60 more to force West Indies to bat again, the follow-on looked a distinct possibility.

All the hoopla may have been around Tendulkar, but it was a far more important day for Kohli, who finally got the chance to show his credentials for the No. 6 spot. He responded well, with an array of wristy flicks, guiding India ever closer to the crucial 391-run mark.

Barring a caught-behind chance on 43, Kohli was barely troubled by the bowling either side of lunch, and his partnership with Ashwin not only avoided the follow-on but swelled towards triple-figures. Kohli progressed to his maiden Test half-century but couldn't carry on, gifting his wicket away while attempting to clear mid-on. There was a scream of disappointment from Kohli, but he has seemingly done enough to at least book a place for the Australia tour.

Another youngster whose tickets for Australia can be confirmed is Ashwin, who continued to find Test cricket easy in his debut series. He used to be an opener at the Under-19 level, and that was reflected during his century, which wasn't a tailender's swing-at-everything effort but a more controlled one.

The early boundaries came through measured drives and flicks, as he outscored Kohli in their partnership. After lunch, two streaky edged fours were bookended by murderous hits over mid-on for six off Bishoo. There were late cuts for four off Edwards and Marlon Samuels, audacious paddles to fine leg after jumping across the stumps on consecutive deliveries, and an air of level-headedness even as he started to run out of partners.

He started to decline the singles towards the end, and the crowd thoroughly enjoyed the tension of seeing whether Ashwin could make it to the hundred with last man Pragyan Ojha for company. The No. 11 survived 14 deliveries, including a testing over from Edwards, before Ashwin stabbed the ball past gully in the next over to bring up the century which caps an eventful month in which he has already won the Man-of-the-Match award on Test debut, and got married.

Even with a sizeable first-innings lead, West Indies looked like the only team likely to lose - their batsmen needed to withstand a trial by spin, and even if they succeeded the visitors couldn't risk declaring too early on the fifth morning to push for a victory given the might of the Indian batting.

Ojha caused some early excitement by getting rid of both Adrian Barath and Kirk Edwards within the 11th over, but Brathwaithe again showed that though he may lack flair, he wasn't short on defensive doggedness. At the other end, Bravo continued to bat as fluently as you'd expect from a man who has two centuries in his previous two innings. There was a moment of concern, when he edged a chance to Kohli at forward short leg in the final over of the day but that was put down.

Though the track showed signs of taking spin, the draw remains the likeliest result.

Comments
Topics mentioned in this article
Cricket Sachin Ramesh Tendulkar Ravichandran Ashwin Kraigg Brathwaite India vs West Indies 2011 Pat Cummins West Indies vs India 2011 DS Berry
Get the latest updates on SA vs IND 2021-22, check out the Schedule and Live Score . Like us on Facebook or follow us on Twitter for more sports updates. You can also download the NDTV Cricket app for Android or iOS.