Listen to the latest songs, only on JioSaavn.com
French Open 2011
Sports Home

Rafael Nadal equalled Bjorn Borg's record of six French Open titles with his 7-5, 7-6 (7/3), 5-7, 6-1 win over Roger Federer in the final at Roland Garros on Sunday. We take a look at the Spaniard's six wins in Paris. 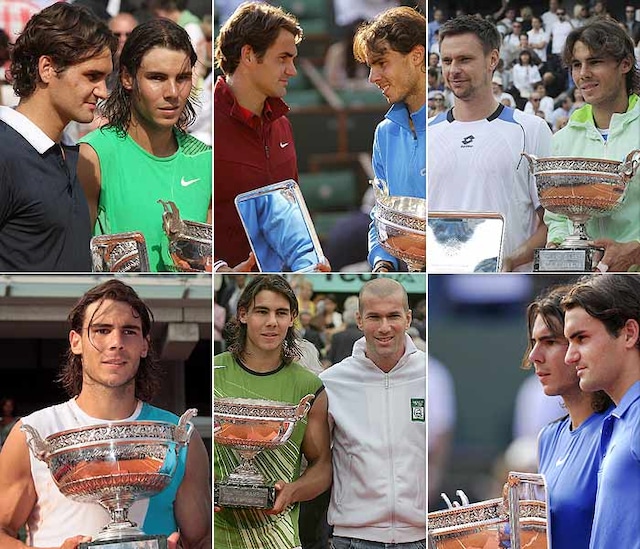 Rafael Nadal equalled Bjorn Borg's record of six French Open titles with his 7-5, 7-6 (7/3), 5-7, 6-1 win over Roger Federer in the final at Roland Garros on Sunday. We take a look at the Spaniard's six wins in Paris. 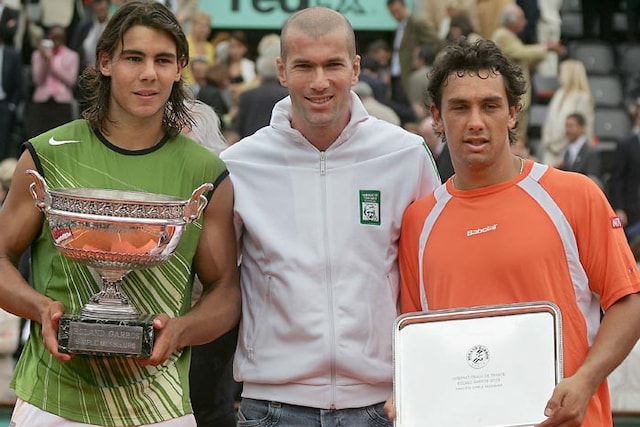 This is the moment that marks the beginning of a new chapter in tennis history. Nadal, just 19, wins his first French Open on his Paris debut. In the all left-handed final, Nadal downs the unexpected finalist, Puerta. The fourth seeded teenager is the youngest Grand Slam winner since Michael Chang at Roland Garros in 1989, aged 17. Nadal had come into the event as favourite having stormed to victory in the preceding Rome and Monte Carlo Masters. (Seen here in the picture is also football legend Zinedine Zidane) 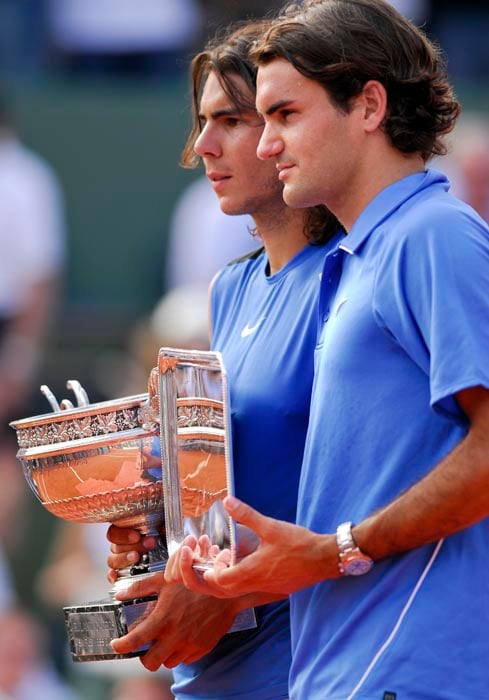 Nadal scuppers Federer's bid to complete his Grand Slam collection by taking his second straight French Open title, coming back from a set down to beat the Swiss. Had he won, Federer would have become the first man to achieve a Grand Slam since Rod Laver in 1969. The victory extended 20-year-old Nadal's winning streak on clay to 60 matches with the 100th victory of his career on the surface. 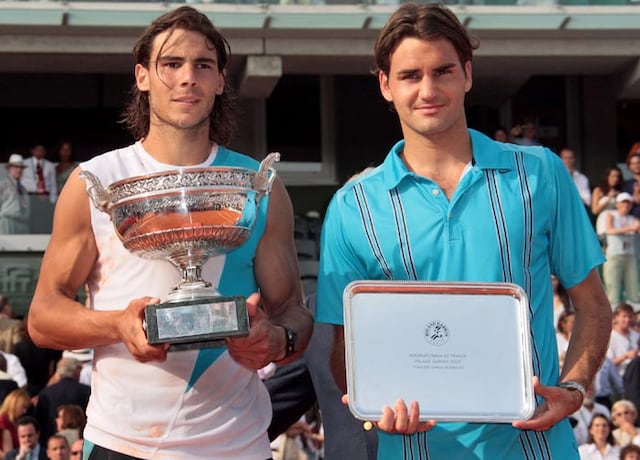 Nadal destroys Federer's historic Grand Slam dream for another year by capturing his third successive French Open. The Spaniard's victory emulates Borg's record of three Roland Garros titles in a row. It also shatters Federer's hopes of capturing a first French Open and becoming only the third man after Don Budge (1938) and Rod Laver (1962 and 1969) to hold all four Grand Slam crowns at the same time. 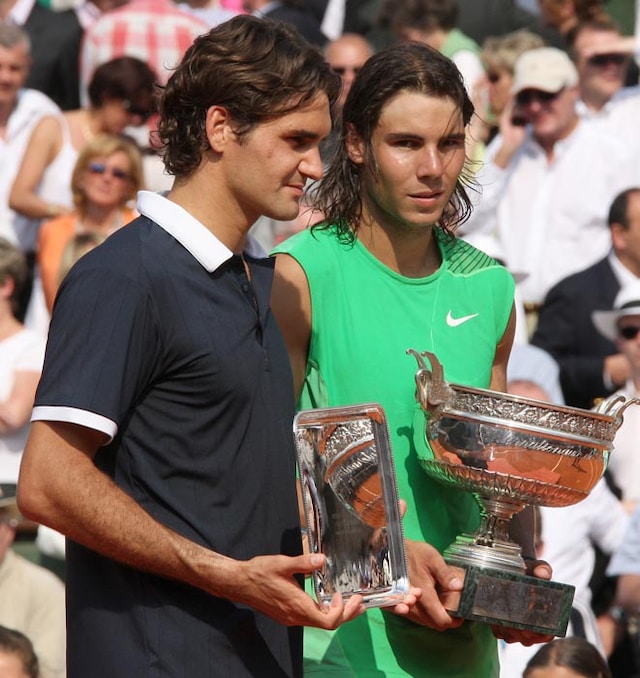 Another final gets added to the Roger-Rafa rivalry, arguably the greatest rivalry in tennis history. Nadal defeats Federer in the French Open final for the third year running, joining Borg as the only man to win four straight titles at Roland Garros. The Spaniard scores a stunning triumph over the world No.1, taking the last nine games of the match. It is the most one-sided final in Paris since 1977. The 22-year-old Nadal wins the title without dropping a set. 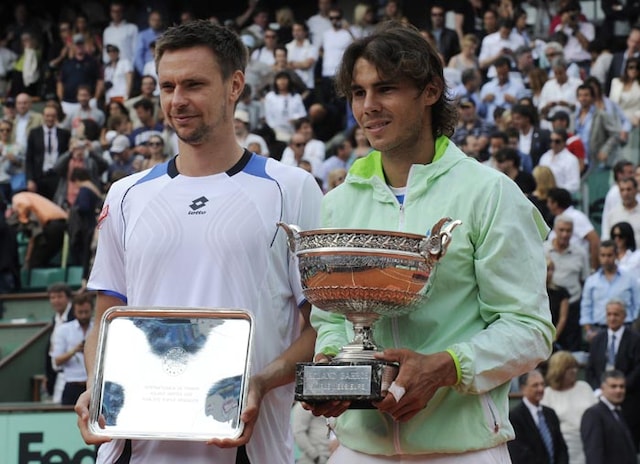 Rafa reasserts his 'King of Clay' status. Having suffered his only career defeat in Paris the previous year in a shock fourth round exit to Robin Soderling, Nadal takes revenge over the Swede for a fifth French Open title. The win takes his tournament record to 38-1 and helps him depose Federer as world number one. It is the second time he wins the title without dropping a set, having first achieved the feat in 2008. 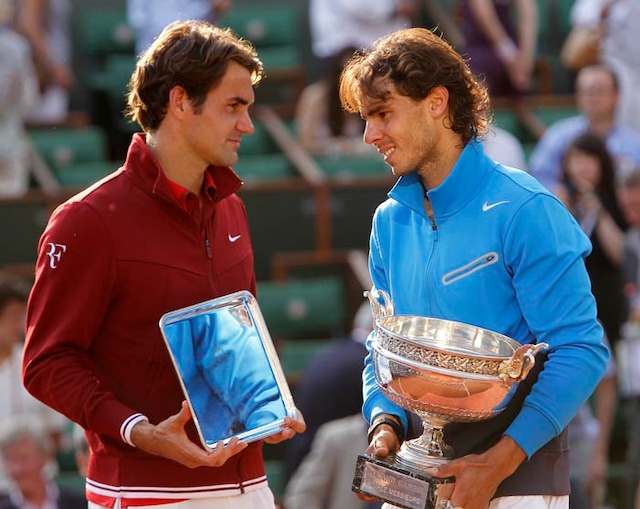 Nadal goes into Roland Garros on a dip with back-to-back claycourt losses to Novak Djokovic, prompting many to question his favourite tag for the first time in many years. However, after a five-set opening struggle against John Isner, he goes from strength to strength. In his fourth French Open final against Federer, who beats Djokovic in the semi-finals, the Spaniard hits back from 2-5 in the first set to win in four tough sets. He thus equals Bjorn Borg's record of six wins in Paris.