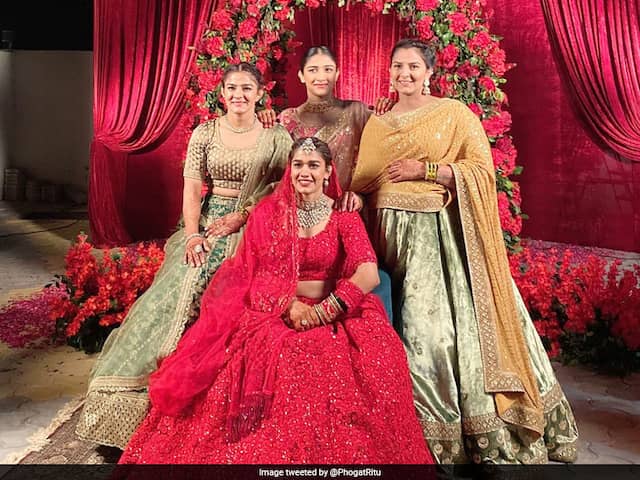 Babita Phogat, the wrestler turned politician, tied the knot with Indian wrestler Vivek Suhag on Monday. Babita Phogat's sister Ritu took to Twitter to congratulate her sister on wedding. "Heartiest congratulations my lovely and beautiful sister @BabitaPhogat. vivek jiju you are one lucky guy. I wish you both a lifetime of happiness and prosperity," Ritu Phogat tweeted. Babita Phogat, Commonwealth Games medallist, had tried her hand at politics earlier this year when she contested from Dadri constituency in Haryana assembly elections.

Heartiest congratulations my lovely and beautiful sister @BabitaPhogat . vivek jiju you are one lucky guy I wish you both a lifetime of happiness and prosperity. #ladyinred #beautifulbride #phogatsisters #weddingclicks #red #symboloflovegeet pic.twitter.com/74nA2MlDsG

Babita lost to independent candidate Sombir Sangwan in the elections. She had received 24,786 votes.

Babita has had a fairly successful professional career so far as he has won three medals in the Commonwealth Games, including two gold and a silver.

She also has a bronze medal to her name in the World Wrestling Championships, which she won in 2012.

She won her first Commonwealth Games medal in front of the home crowd, a silver medal, in New Delhi in 2010.

While her second medal in the same competition came in the next edition in Glasgow, where she improved her performance and clinched her first-ever Commonwealth gold medal.

Four years later, she repeated the same performance to clinch another gold medal at the Gold Coast Games in Australia.

Comments
Topics mentioned in this article
Wrestling
Get the latest Cricket news, check out the India cricket schedule, Cricket live score . Like us on Facebook or follow us on Twitter for more sports updates. You can also download the NDTV Cricket app for Android or iOS.
Advertisement