Virat Kohli was adjudged leg-before off Trent Boult. Even after Kohli reviewed the decision, the on-field decision stayed as replays suggested the ball would have clipped the bails. 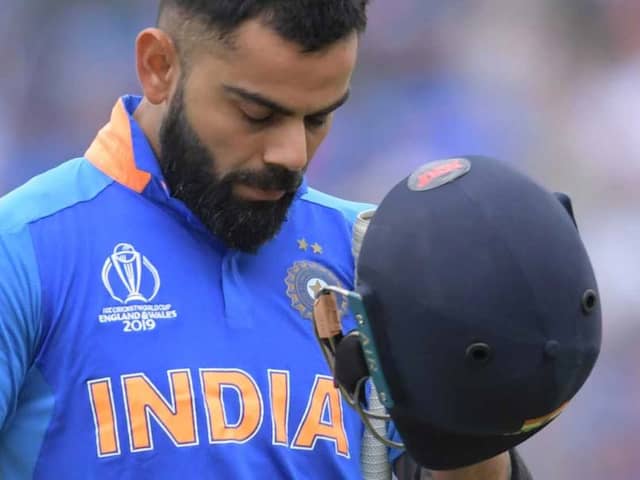 Virat Kohli was adjudged LBW off the bowling of Trent Boult in the semi final of World Cup 2019.© AFP

Virat Kohli, Rohit Sharma and KL Rahul all departed cheaply for one run each as India lost to New Zealand by 18 runs in the semi-final on Wednesday. The two openers, Rohit Sharma and KL Rahul got out after edging away-swinging deliveries while Virat Kohli was adjudged LBW off the bowling of Trent Boult. Even after Kohli reviewed the decision, the on-field decision stayed as replays suggested the ball would have clipped the bails. Former Pakistan fast bowler Shoaib Akhtar, however, termed Virat Kohli's dismissal as "unlucky" and "poor decision".

"It was a poor batting performance by the top five players. Rohit (Sharma) got a brilliant ball. However, I think Virat Kohli was unlucky as it was a poor decision to give him out. The ball was just clipping the bails and he was given out by the on-field umpire," Shoaib said in a video posted on his YouTube channel.

Chasing 240, Indian batters were undone by Matt Henry's brilliant opening spell as he returned figures of 3/37. Ravindra Jadeja (77) and MS Dhoni (50) shared a 116-run stand for the seventh wicket. However, in the end that proved to be not enough, especially after Dhoni was caught short of crease by a brilliant direct hit by Martin Guptill.

"So close, yet so far for India. It was a brilliant fightback from the lower order after the top-order batsmen gave away their wickets on ordinary deliveries," Shoaib added.

"The other batsmen also did not show much intent until Jadeja came in and played superbly. And so was Dhoni who kept India in the hunt.

"It was unfortunate that Jadeja got out to a ball that he could have hit for a six. And had Dhoni dived, who knows, he wouldn't have got run-out and would have taken India across the finishing line," he added.

He also termed 37-year-old Dhoni as legend. "Dhoni is an absolute legend. He is a great ambassador for the game. Till the time he was there, it looked like he would win the game for India. However, he was unfortunate and couldn't take India to the finals.

"Indian fans should be proud of the way their team played in the World Cup," Shoaib said.

New Zealand will now play either Australia or England in the final on Sunday at Lord's.