Showing dissent at an umpire's decision is an offence under the International Cricket Council's code of conduct. 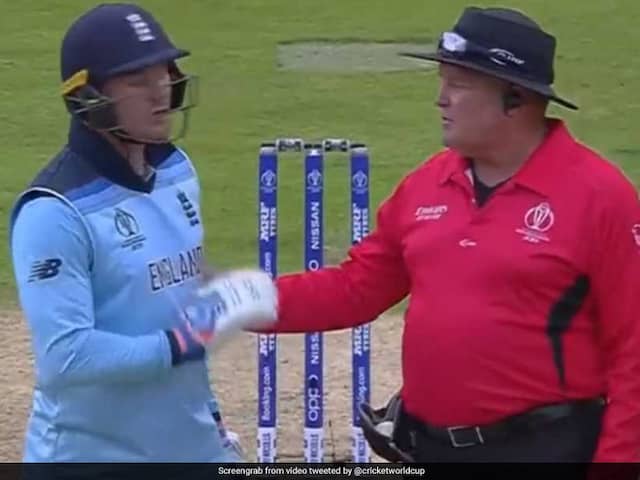 Jason Roy was given caught behind off the bowling of Pat Cummins.© Twitter

England opener Jason Roy refused to walk after being given out by umpire Kumar Dharmasena in the World Cup semi-final against Australia at Edgbaston on Thursday. Roy was smashing the Australian bowlers all over the park and was just 15 runs short of his 10th ODI century when he was sent to the pavilion despite being miles from the ball. Roy was given caught behind off the bowling of Pat Cummins but he was unable to review the shocking decision as there was no review left. Nevertheless, Dharmasena confusingly and incorrectly signalled for a review, with Australia pointing out the official's mistake.

Roy was angry and he expressed it by refusing to walk after being told to head back to the pavilion.

The furious batsman had to be ushered away from the crease by square leg umpire Marais Erasmus.

Fans on Twitter slammed the controversial decision at a time when England were cruising into the World Cup final.

Later in the day, Jason Roy was fined for breaching Level One of the ICC Code of Conduct.

England booked their place in the World Cup final against New Zealand with a dominant eight-wicket win over reigning champions Australia.

Jason Roy hit a blistering 85 as England reached a victory target of 224 with a mammoth 107 balls to spare.

Openers Roy and Jonny Bairstow (34) put on 124 for the first wicket, their fourth consecutive century stand.

England, losing finalists in 1979, 1987 and 1992, will now face New Zealand, who have also yet to win the World Cup after finishing runners-up to Australia four years ago, in Sunday's final at Lord's following the Black Caps' surprise semi-final win over India.

Jason Roy World Cup 2019 Cricket Australia vs England, 2nd Semi Final
Get the latest Cricket news, check out the India cricket schedule, Cricket live score . Like us on Facebook or follow us on Twitter for more sports updates. You can also download the NDTV Cricket app for Android or iOS.