Jason Roy is out of the England playing XI now due to a hamstring pull. 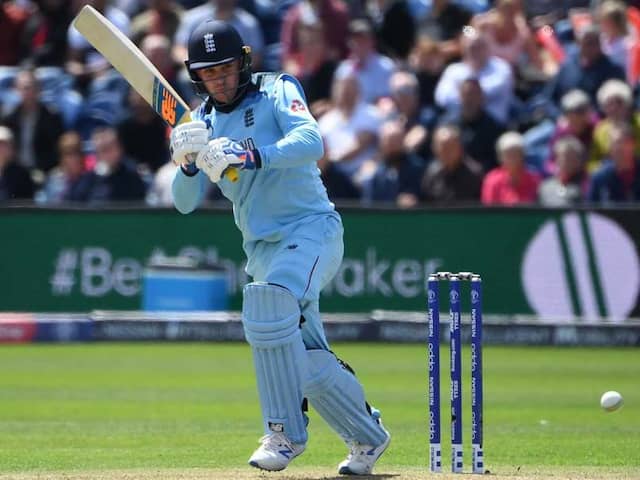 England's in-form opening batsman Jason Roy is targetting a return to the playing XI for their World Cup 2019 clash against arch-rivals Australia. Roy was sidelined after he pulled up his hamstring in the game against the West Indies while chasing a ball on the field. He will miss the games against Afghanistan and Sri Lanka. The 28-year-old has been in good touch and scored a match-winning knock of 153. England will take on Australia in a marquee clash at the Lord's on June 25 and they will be hoping that their star opener gets match-fit before the epic encounter.

Roy is hopeful of making a comeback to the playing XI as the hosts face the World Cup holders.

Roy's opening partnership with Jonny Bairstow has been a key factor in England's rise to the top of the one-day international rankings and their status as favourites to win the World Cup.

"If this week goes to plan, then Australia. If not, then who knows. Hamstrings are such a grey area," Roy added.

The 28-year-old suffered a similar injury during England's tour of the Caribbean earlier this year and with the World Cup featuring a long pool phase that sees all 10 teams play each other ahead of the semi-finals, the 28-year-old Roy is confident of returning to action.

"I did it in the West Indies and it was a lot worse. It could be way worse, the scan told me it's minimum 10 days. We've got to assess it as we go along," Roy said.

Roy hit a fifty in England's opening win over South Africa and then struck a commanding hundred in the host nation's victory over Bangladesh. He further mentioned that staying out of the field is frustrating. "It's a huge understatement being frustrated, but I've got to keep smiling," Roy added.

Roy has had just one failure so far in the World Cup, when he was knocked over on eight against Pakistan. Notably, it was the only game in which England suffered a setback.

England captain Eoin Morgan, spoke highly of his opening batsman, emphasising his importance at the top of the order.

"I certainly believe Jason will play again in this tournament. He's out of the next two games, so we'll see how he pulls up after that," Morgan was quoted as saying on Monday.

When Morgan was asked about who should be Roy's replacement, if the right hander fails to recover in time. The England captain replied "He's obviously a huge part of what we've been doing. He's in the best form of his life, so he's very important."

Jason Roy Cricket England vs Australia, Match 32 World Cup 2019
Get the latest Cricket news, check out the India cricket schedule, Cricket live score . Like us on Facebook or follow us on Twitter for more sports updates. You can also download the NDTV Cricket app for Android or iOS.