"Get Off, You Cheat": David Warner Booed, Heckled By Crowd In England

David Warner and Steve Smith returned to international duty earlier this month after completing 12-month suspensions for their roles in a ball-tampering scandal in South Africa. 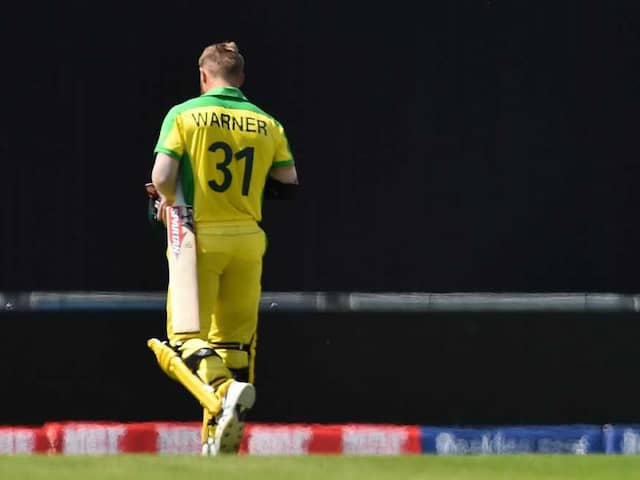 The jeers that greeted David Warner were audible, although the Hampshire Bowl ground was far from full.© AFP

Australia's opening batsman David Warner was booed and heckled by the crowd during the World Cup 2019 warm-up match against England on Saturday. Warner was playing his first game in England following a year-long ban for ball-tampering. Both Warner and former Australia captain Steve Smith returned to international duty earlier this month after completing 12-month suspensions for their roles in a ball-tampering scandal in South Africa.

The jeers that greeted Warner were audible, although the Hampshire Bowl ground was far from full.

And when the left-hander arrived at he crease, one fan shouted, "Get off Warner you cheat."

Australia are set to be in England for over four months on a lengthy tour that includes both the World Cup and the subsequent five-Test Ashes series.

A report in Thursday's edition of Britain's Daily Mirror newspaper said Warner's manager had sought security assurances from Cricket Australia, with the batsman's wife wanting to give birth to their third child in Britain.

Australia skipper Aaron Finch, speaking at this week's World Cup captains' press conference, said, "Once the World Cup gets under way and you start getting into the tournament, probably the game against England, and then further on the Ashes there's no doubt the crowd will start to play a bit of a part but that's expected.

"No matter where you go the fans play a big part."

Earlier, England's Barmy Army fired the first shots at their arch-rivals with a brutal pot shot on Twitter.

Steven Smith World Cup 2019 Cricket
Get the latest Cricket news, check out the India cricket schedule, Cricket live score . Like us on Facebook or follow us on Twitter for more sports updates. You can also download the NDTV Cricket app for Android or iOS.