Shreyas Iyer played solid knocks of 71 and 65 in the second and third ODIs against the West Indies, making his case stronger for the ODIs. 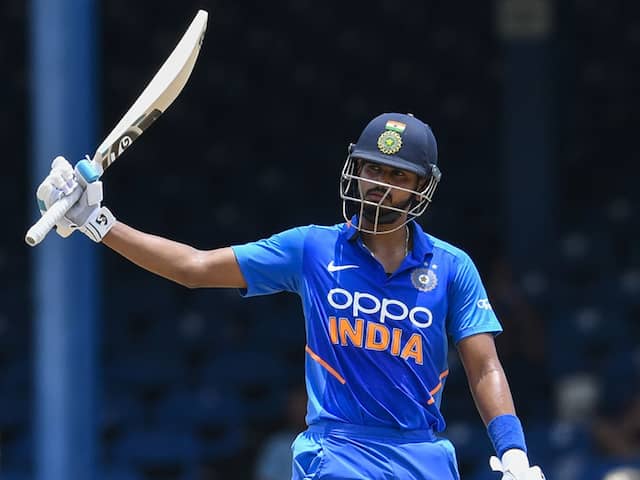 Shreyas Iyer was in sublime touch in the ODI series against the West Indies.© AFP

Ravi Shastri, who has been reappointed head coach of the Indian cricket team till 2021, wants Shreyas Iyer to bat at number 4 for India in One-day Internationals (ODIs). Skipper Virat Kohli however had backed young wicket-keeper Rishabh Pant to bat at the same slot. Kohli, during the toss for the 2nd ODI of the three-match series against the West Indies, had admitted that they were backing Rishabh Pant to bat No. 4 while Shreyas Iyer will bat at five. He had also said that the batting order may change according to the situation.

Ravi Shastri, in an interview to The Times of India, said, "One of the areas we concentrated on over the last two years was to blood as many youngsters as possible. Shreyas Iyer, for instance, he is going to stay at No. 4."

Iyer, after the first match of the ODI series washed out, played solid knocks of 71 and 65 in the second and third matches, making his case stronger for a longer stint in the ODI side. He however batted at number 5 in the three-match series.

Pant, who was Virat Kohli's favourite number 4, failed badly. He scored 20 runs in the second ODI while departed for a golden duck in the final match.

Notably, India clinched the three-match T20I series 3-0 before emerging victorious in the ODI series 2-0 against the West Indies.

India will take on West Indies in the first Test of the two-match series, beginning on August 22 in Antigua.

Virat Kohli Ravi Shastri West Indies vs India 2019 Cricket
Get the latest Cricket news, check out the India cricket schedule, Cricket live score . Like us on Facebook or follow us on Twitter for more sports updates. You can also download the NDTV Cricket app for Android or iOS.