"Dream Is To Represent India In World T20": Krunal Pandya After Impressive Show Against West Indies

Krunal Pandya was bestowed with the Man Of The Match award for his impressive show in India's T20I series win against the West Indies. 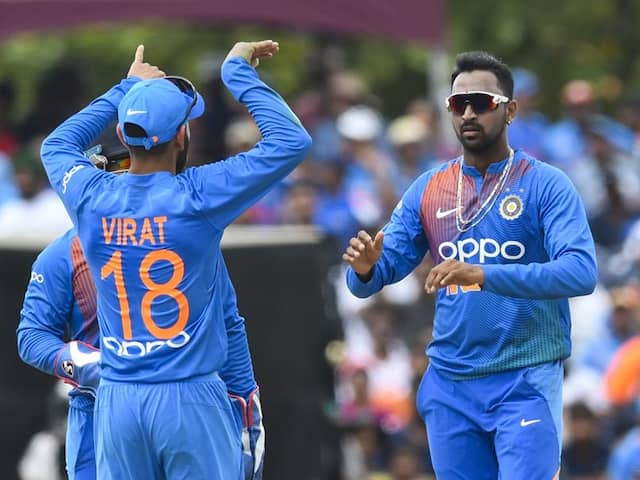 Krunal Pandya impressed in India's 3-0 clean sweep victory over the West Indies in a recently-concluded T20 International series. The left-handed all-rounder has played 14 T20I matches for India and is yet to make his debut in the 50-over format, but Krunal Pandya has his focus firmly set on the ICC T20 World Cup, which will be played from October 18 to November 15, 2020, in Australia. "The Windies series was a big confidence booster. It was the first series of the season and to do well against some quality players always helps. This is just the beginning and I will look to carry this forward into the next series," Krunal Pandya told IANS.

"Looking to stay true to my goal and play across formats. That is an area of focus and I have played one-days for India 'A' in the last two years and the experience has given me confidence that I can rise to the challenge.

"Working closely with Rahul Dravid and Paras Mhambrey has helped. While Paras bhai has helped me with fine-tuning my bowling skills, just speaking to Rahul bhai makes you a more knowledgeable cricketer. It is such an experience to pick on his cricketing brain. I have tried discussing how to react to a situation and that helps. I want to play for India in all the formats and do well," he added.

But then, the World T20 is just a year away and like skipper Virat Kohli said ahead of the series against West Indies, the preparation has begun. For Krunal though, it is about taking baby steps to the ultimate goal of booking a seat on the plane to Australia in 2020.

"The dream is to represent India in the World T20. Every performance will matter, but that is a long term goal. For now, it is about making it to the team in the next series and then do well. If I manage to keep performing, the goal of playing in the World T20 in Australia will obviously be fulfilled. However, for now, the focus is the next series against South Africa. Always important to take it one at a time," he explained.

While he is the elder of the two brothers, success hasn't been a walk in the park for Krunal. But that doesn't bother him as he believes that Hardik deserves all the accolades for the hardwork that the fast bowling all-rounder has put in.

"There has never been a case of getting out of Hardik's shadow. We enjoy each other's success. Have never thought of any comparison as our journeys have been very different. There has never been any insecurity. Whoever succeeds, the other person is very happy. Our mindsets are very different and the focus is on making the country proud," he pointed.

While Krunal is still new to the international circuit, he is a pro on the T20 circuit, having played for Mumbai Indians under Rohit Sharma. Asked about the difference in the approach of Rohit and India skipper Virat Kohli, Krunal said he doesn't see much difference.

"They are both very successful captains and they are all about standing by the teammates. They are both brilliant leaders and be it Mumbai Indians or Team India, I always look to give it my 100 per cent. Have not really found much difference as they both go out to win," he explained.

Hardik landed in trouble after some of his comments on a chat show didn't go down well with fans. Krunal said that Hardik's USP is that he knows how to own up after committing a mistake.

"See, mistakes happen. We are all human at the end of the day. But Hardik's strength is that he accepts his mistake and tries to rectify it. Some people try to ignore the reality, but not with him. He has learnt from his mistake and the way he returned to the field after it, not just in the IPL, but also for the Indian team bears testimony to the fact that he has put the mistake behind him and is focused on doing well for the country," he signed off.

India Cricket Team Cricket West Indies vs India 2019 Krunal Pandya
Get the latest Cricket news, check out the India cricket schedule, Cricket live score . Like us on Facebook or follow us on Twitter for more sports updates. You can also download the NDTV Cricket app for Android or iOS.