Jasprit Bumrah has been the lynchpin of Indian bowling attack and beat his fellow teammate Mohammed Shami to achieve this feat. 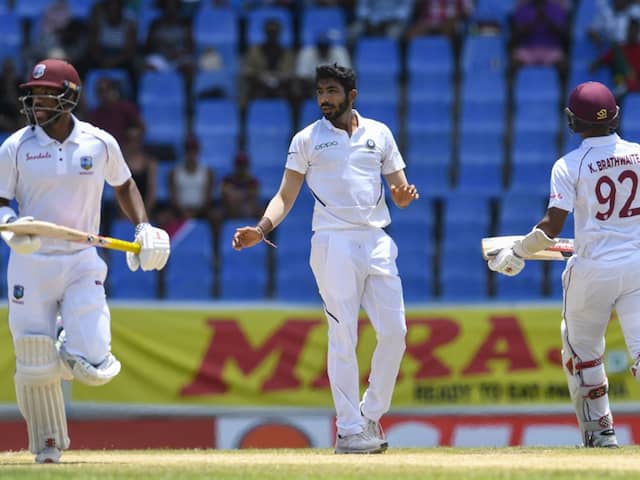 Jasprit Bumrah achieved a milestone in the first Test against the West Indies.© AFP

Jasprit Bumrah dismissed Darren Bravo soon after Tea on Day 2 of the first Test between India and the West Indies in Antigua to pick his 50th Test wicket. In the process, Jasprit Bumrah beat spinner Ravichandran Ashwin to become the Indian bowler with fewest deliveries to pick 50 wickets in Test cricket. Bumrah took 2465 balls to pick 50 wickets while Ashwin bowled 2597 deliveries to achieve the feat. Among the fast bowlers for India, Jasprit Bumrah, who has been the lynchpin of India's bowling attack, took 11 Tests to pick 50 wickets, beating Venkatash Prasad and his fellow teammate Mohammed Shami in the process. The previous best record was jointly held by Venkatesh Prasad and Mohammed Shami, who achieved the feat while featuring in their 13th Test.

Bumrah was rested for the limited-overs against the West Indies. He picked up a wicket against West Indies A in the practice match.

Bumrah, making his 11th appearance in Tests, has bowled with an economy rate of 2.66. He holds the best bowling figures of 6/33.

The Ahmedabad-fast bowler made his Test debut against South Africa in Cape Town, last year. He has since then proved to be a vital cog for the Indian cricket team.

In the first Test, India scored 297 runs after being asked to bat by the hosts. Ajinkya Rahane was the highest run scorer in the first innings with 81 runs while Ravindra Jadeja contributed 58 runs lower down the order.