India opener Shikhar Dhawan and his son enjoyed a quiet moment before India take on West Indies in the one-off T20I. 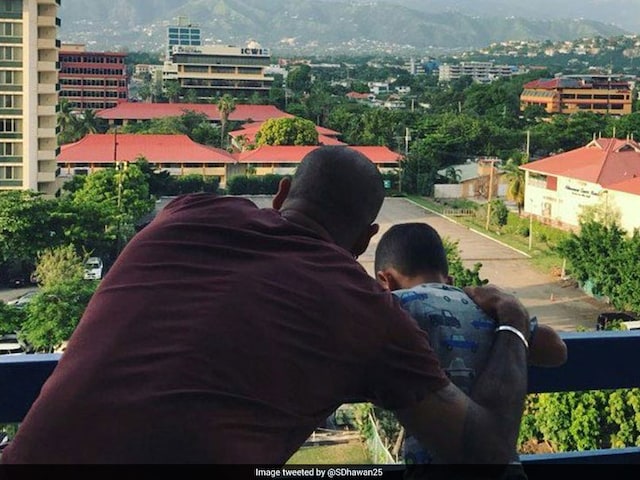 India have already clinched the One-Day International series 3-1 against the West Indies and will aim to sign off the Caribbean tour with a win in the one-off Twenty20 International when the two teams face-off on Sunday in Kingston. Just a day before the last match of the tour, Indian opener Shikhar Dhawan shared an adorable picture with his son Zoravar. Dhawan took to micro-blogging site Twitter and shared the beautiful picture, captioning it: "Like father, like son.. Enjoying natural beauty."

In the picture, Dhawan and Zorawar can be seen enjoying Kingston's picturesque view from the balcony of their room.

The Virat Kohli-led India kicked off their Caribbean tour after suffering a heavy defeat at the hands of arch-rivals Pakistan in the ICC Champions Trophy final at the Oval. Dhawan, who was the highest run-getter in the mega tournament with 338 runs, had won the 'Golden Bat' award.

In the ongoing West Indies tour, Dhawan scored 161 runs at an average of 32.20 including two half-centuries in the ODI series.

Meanwhile, the one-off T20 in Kingston might be slightly more difficult for the visitors to be able to outplay the hosts as the Windies look more dominant in the shortest format of the game with the likes of Chris Gayle, Samuel Badree, Sunil Narine and other big hitters in the side.

Gayle, who is West Indies' most successful batsman in the T20 format with 1519 runs at an average of 35.32, replaced Lendl Simmons, who had struggled for runs in the T20 series against Afghanistan.

It will be Gayle's first T20 match at his home ground, Sabina Park. The marauding batsman, who has two T20 centuries, last played an international match for the West Indies in the 2016 World T20 final against England at Eden Gardens.

The West Indies team will be led by the T20 World Cup hero Carlos Brathwaite.