Yashasvi Jaiswal's U-19 World Cup Man Of The Series Trophy Broken In 2: Report

Yashasvi Jaiswal could not recollect how the trophy was broken. 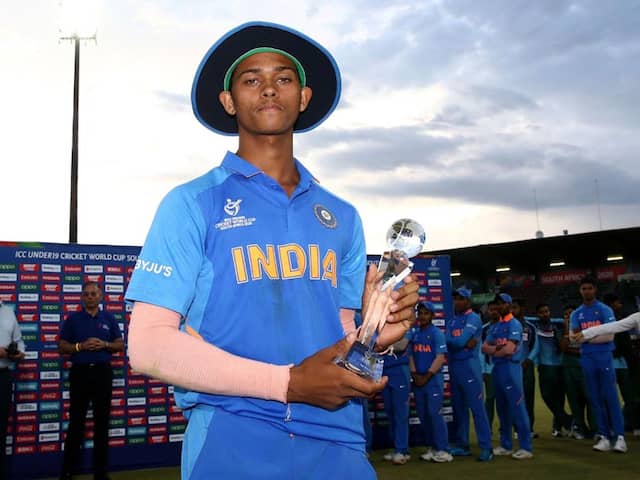 Yashasvi Jaiswal top-scored with 400 runs and was named player of the tournament in the U-19 World Cup.© ICC

Yashasvi Jaiswal's U-19 World Cup did not end how he wanted it to as India lost to Bangladesh in the final. But on a personal front, he tallied 400 runs in South Africa, and was adjudged the player of the tournament. His trophy, a silverware most would love to preserve for the rest of their lives, was seen lying on a table, broken into two pieces as per an Indian Express report. Jaiswal could not recollect how it happened but more importantly, he isn't upset.

His coach Jwala Singh said: "This isn't the first time! He cares more about runs, doesn't fuss too much about trophies".

"Until now, it was just age-group tournament, now that I will be in man's world I know I have to double my hardwork," Jaiswal said.

"It's important that in these times, you spend time on yourself. I don't waste time thinking about how others should understand me; I have understood myself, that's more important," Jaiswal said on how he wakes up early every morning to spend time with himself.

"My fight isn't with the world. It's with me. My only bad habit is cold drinks, I plan to leave it now. Too much sugar. I have to get fitter. I do meditation, I have started to give more attention to fitness as its key to succeed," he said.

Comments
Topics mentioned in this article
Under 19 World Cup 2020 Yashasvi Jaiswal Cricket
Get the latest Cricket news, check out the India cricket schedule, Cricket live score . Like us on Facebook or follow us on Twitter for more sports updates. You can also download the NDTV Cricket app for Android or iOS.