Defending champions India cruised to a 90-run victory over Sri Lanka in an opening group league encounter of the ICC U-19 World Cup on Sunday. 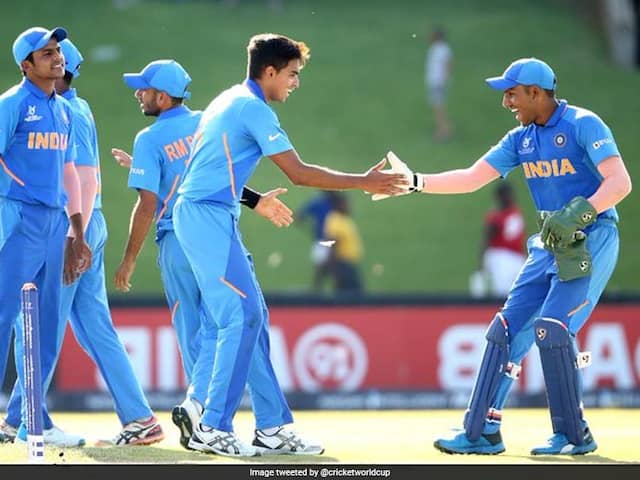 An impressive batting performance, topped by a disciplined bowling, saw defending champions India cruise to a 90-run victory over Sri Lanka in an opening group league encounter of the ICC U-19 World Cup on Sunday. Batting first, India scored a competitive 297 for 4, riding on half-centuries from their premier batsmen -- opener Yashasvi Jaiswal (59 off 74 balls) and skipper Priyam Garg (56 off 72 balls).  There were significant contributions from vice-captain Dhruv Jurel (52 off 48 balls) and late entrant all-rounder Siddhesh Veer (44 off 27 balls and 2/34 in 6 overs), which took the total close to 300-run mark.

The bowlers then kept the Lankan batsmen under check, bowling them out for 207 in 45.2 overs.

Fast bowler Kartik Tyagi (1/27 in 7.2 overs), who already has a multi-crore IPL contract, was the most impressive as he time and again breached the 140kmph mark.

The opposition batsmen found his short ball difficult to handle. Leg-spinner Ravi Bishnoi (2/44 in 10 overs), who will be seen donning Kings XI Punjab colours in the IPL, showed good control, not letting the batsmen get away with anything.

Left-arm seamer Akash Singh (2/29 in 9 overs) brought the ball back into the right-hander with rival skipper Nipun Dananjaya (50) being the only batsman, who looked comfortable out there in the middle.

It was a total team effort by the 'Boys in Blue' who literally outclassed their South Asian neighbours in all departments of the game with a thoroughly professional performance.

"I would rate this performance 9 out of 10 although we could have scored 320. But I am happy with the overall show from the boys," skipper Garg said after the match.

The track was a bit on the slower side as Jaiswal and Divyansh Saxena (23) put on 66 for the opening stand.

There were no big stands but steady ones that kept the momentum going.

India's most consistent batsman NT Tilak Verma (46 off 53 balls) ran hard between the wickets adding 46 with Jaiswal before the former was dismissed.

Skipper Garg, the most experienced first-class player in the tournament along with Tilak, added a run-a-ball 59.

Garg, who had three boundaries, was joined by Jurel for a 63-run stand for the fourth wicket that took the score to 232. But credit to Veer, who used the long handle to good effect in a 65-run stand in 7.2 overs with Jurel.

Veer hit six fours and a six in an effort that had cheeky scoops and sweep shots as well.

Sri Lanka U19 Under 19 World Cup 2020 Priyam Garg Yashasvi Jaiswal Cricket
Get the latest updates on IPL 2020, check out the IPL Schedule for 2020 and Indian Premier League (IPL) Cricket live score . Like us on Facebook or follow us on Twitter for more sports updates. You can also download the NDTV Cricket app for Android or iOS.