Hewitt, the 32-year-old Australian who once topped the world rankings, made his first start in the event since 2009. 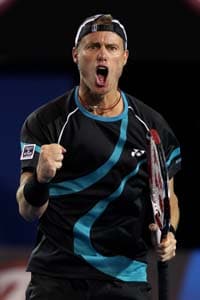 James Blake advanced to the second round of the Sony Open in Miami with a 6-2, 6-2 win over fellow American Ryan Harrison on Wednesday night.

The 33-year-old Blake, a former top-10 player now ranked 95th and playing her on a wild card entry, was far more active than the 20-year-old Harrison, ranked seven spots higher, in the 57-minute match.

"It was one of those days when things are going in and right from the start I felt really good," Blake said. "Tonight is an example of what can happen when I can put it together. I was really being aggressive and taking it to him."

Harrison won his first two service games to take a 2-1 lead, but Blake won the next five games to take the first set. In the second set, Blake raced to a 4-1 lead.

Hewitt, the 32-year-old Australian who once topped the world rankings, made his first start in the event since 2009.

He has been injured much of the past three years, undergoing hip surgery and operations on his left foot, and is now ranked No. 91.