Leander Paes on Monday hinted at a possible retirement, saying he has lived his career and doesn't see himself playing past another year. 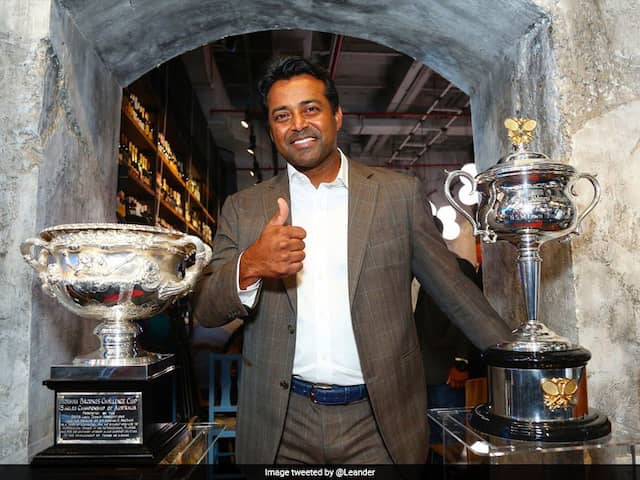 Leander Paes went on to better his own record by achieving his 44th Davis Cup doubles win.© Twitter

Veteran Indian tennis player Leander Paes on Monday hinted at a possible retirement, saying he has lived his career and doesn't see himself playing past another year. Paes was named in India's Davis Cup squad for the Pakistan tie after several top players made themselves unavailable to travel to Islamabad. The 46-year-old Indian went on to better his own record by achieving his 44th Davis Cup doubles win, this time partnering debutant Jeevan Nedunchezhiyan, as India routed Pakistan 4-0 last week.

"My experience carries me through now but in the longer run what's best for the team is that I should not be playing past another year," Paes told reporters.

"I am not going to play much longer, I have had a great 30-year stint in Davis Cup. I have lived my career playing for the country."

However, Paes said he will always be there to represent his country, if need be.

"For me, when it comes to being called for a tie whatever the circumstances I will represent my country."

The Atlanta Olympic bronze medallist said that nurturing a young team should be the main objective for Indian tennis right now.

"Already by 46, I should have been moved out by the next generation coming up," Paes said.

"So to really be looking at it objectively, to nurture a younger team is what's important," he said.

Paes, who has won 18 Grand Slam titles, said coaching youngsters is one of the things he plans to do in the future.

"I was really focused on this tie, I had to motivate the youngster. Now I'm going to think about my 2020 season. I will be thinking hard about these 30 years I have just completed. And I'm going to evaluate with my team what this new season brings," he said.

"There are other things that are motivating me so much. A dream of mine is to coach and train and nurture youngsters to win Olympic medals, to win the Wimbledon championship."

Talking about the Pakistan tie, Paes said he volunteered to play because he didn't want India to be relegated in the Davis Cup.

"My reason for this Davis Cup was to make sure India as a team didn't forfeit the tie with the players not going to Islamabad to play ... then for the next three to four years we would be relegated to a zonal group and would have to fight our way up," he said.

"None of us have put 30 years to see that happen. The last time that happened was in 1974 when India was to play South Africa."

Meanwhile, coach Zeeshan Ali and non-playing captain Rohit Rajpal lavished praise on Paes, saying the experience the veteran brings with him is unmatched.

"Experience is one thing that he brings to the table, having played the amount of Davis Cup matches that he has played and won. No matter where we go and which team we play, they all look up to him. It does not have to be only Indian players," Ali said.

(This story has not been edited by NDTV staff and is auto-generated from a syndicated feed.)
Comments
Topics mentioned in this article
Leander Paes Tennis
Get the latest Cricket news, check out the India cricket schedule, Cricket live score . Like us on Facebook or follow us on Twitter for more sports updates. You can also download the NDTV Cricket app for Android or iOS.
Advertisement