Far From Home, Djokovic Is Celebrated As A Favorite Son

The final Sunday became Serbia Day for fans of Novak Djokovic, who tied the Australian Roy Emerson with his sixth Australian Open title. It was his 11th major singles championship, equaling the career total of another Australian great, Rod Laver, and Bjorn Borg. 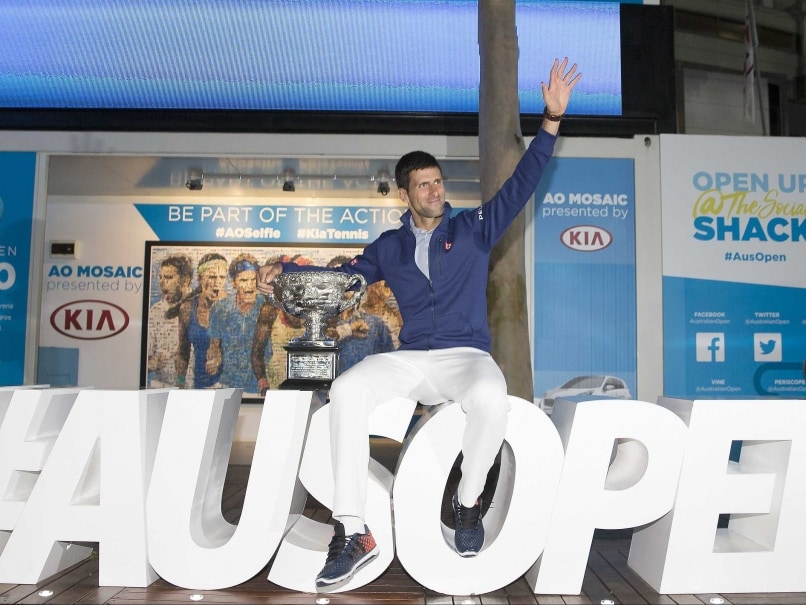 Novak Djokovic was trying to explain to the television studio hosts how he managed to tie two Australian legends with his 6-1, 7-5, 7-6 (3) victory against Andy Murray in the Australian Open final. But he could not hear himself think.

Below the makeshift broadcasting studios on the Melbourne Park grounds, a large group of fellow Serbians had broken into song.

"They're saying 'We Love You' in Serbian," Djokovic said sheepishly. (Djokovic Says Supremacy Over Top Three is No Accident)

For one piquant mix of people in this country's melting pot, Australia Day last Tuesday was not the only time during the tournament set aside for nationalistic revelry. The final Sunday has become Serbia Day for fans of Djokovic, who tied the Australian Roy Emerson on Sunday with his sixth title here. It was his 11th major singles championship, equaling the career total of another Australian great, Rod Laver, and Bjorn Borg.

Djokovic, 28, carried a stuffed toy wombat, Fatso, into the match, a good-luck token he borrows every year from a volunteer driver who ferried him to and from the tennis grounds during his first title run in 2008. 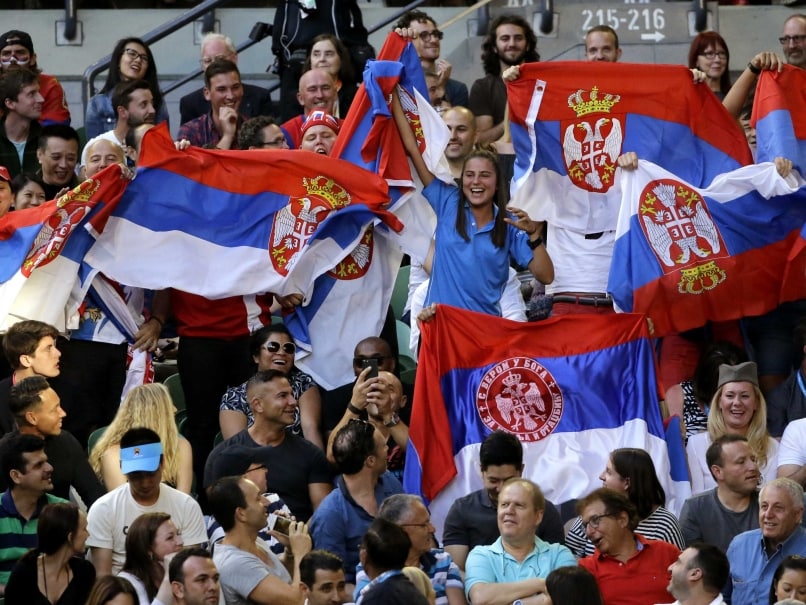 Novak Djokovic supporters cheer him on during the Australian Open final.

And his fans came bearing, and in some cases wearing, their own lucky charms. Some came in water polo caps in the red, blue and white colors of Serbia in a nod to the country's world championship water polo team, which received shout-outs from Djokovic on his social media accounts during its march to the title last August in Kazan, Russia.

Others wore red, blue and white bandanas tied around their heads, the Serbian flag draped across their shoulders like capes or cinched with knots at their chests, and Serbian football scarves covering their necks. One man wore a white sweat jacket with three silk-screened images of Djokovic on his back.

Many arrived 4 1/2 hours before the first point of the final so they could queue up to have their faces painted. Popular choices were the Serbian flag or Go Nole, which is Djokovic's nickname.

Sandra Vukovic, a Brisbane resident of Serbian ancestry, said she waited 25 minutes to have red, blue and white stripes applied ear to ear with a white eagle painted around her left eye.

Several hundred Serbian fans paid 35 Australian dollars ($24.79) for a grounds pass and planted themselves in front of the jumbo screen on a spacious garden square that effectively has become Novak's Neighborhood over the last nine years.

The square is set up like a pedestrian version of a drive-in, with double chaise lounges and straight-back chairs all pointed toward the screen and available on a first-come, first-serve basis. By 4 p.m., 3 1/2 hours before Djokovic and Murray walked out on the court, all the seats were taken.

Vukovic, who said she bought a grounds pass because she could not afford a $600 ticket, the cost of the cheapest seats for the final, has been attending the tournament for nearly a decade. She said she comes to cheer for Djokovic, whose humility she finds irresistible. 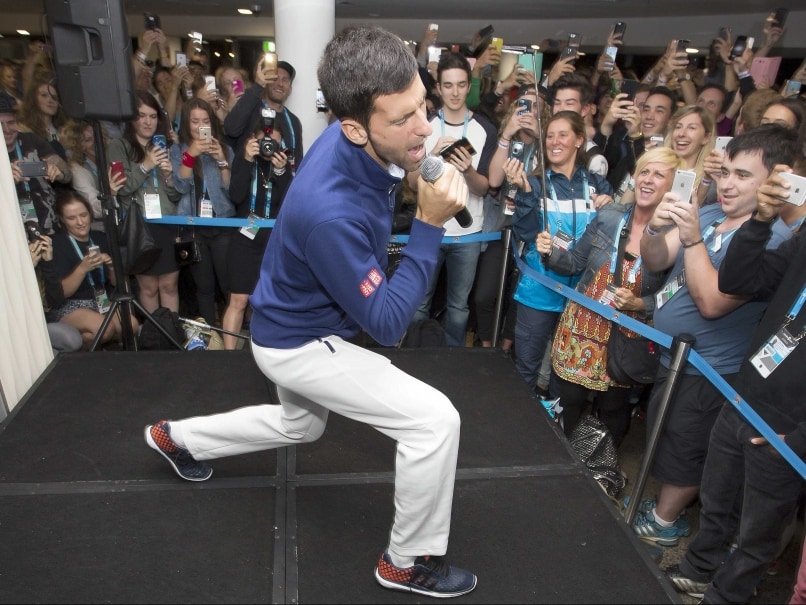 Djokovic explained the reason for his modesty in his postmatch news conference. Asked if his victories already in 2016 over Murray, Roger Federer and Rafael Nadal are proof that he has separated himself from the rest of the competitors, Djokovic said he did not think that way because then "you can get a big slap from karma."

While Djokovic is the main draw, he is not the only attraction for the Serbs who spilled over the grass and onto the pavement, where they sat cross-legged, necks craned at the screen.

"It's become like a tradition," said Vukovic, who has become friends with many of the other regulars. With a sweep of her hand, she indicated a group seated at a picnic table behind her. "I met these people one year at the tournament," she said.

Vukovic held in her lap a glossy photograph of Djokovic with the words "I Can't Keep Calm. I'm a Nole fan."

For Vukovic, unlike Djokovic, who won his Australian Open tuneup in Doha, 2016 did not start auspiciously: She lost her job. "But I think Novak's my lucky charm," she said. "I got a new job that I'll be starting when I get back to Brisbane."

For Australia's sizable Serbian population, the men's final day of the tournament has become their chance to pay homage annually to their sporting hero.

"Nole's like a god in Serbia," said Tom Dimitrijevic,, who was on break from his job supervising the tram service operating outside the tennis grounds.

"I was in Serbia during last year's French Open," Dimitrijevic said, referring to the year's second major, which Djokovic lost to Stan Wawrinka in four sets in the final. "After he lost to Wawrinka, it was like a week of mourning. People were so dejected in the streets.

"I don't think Australians understand. This is a prosperous country. But in Serbia, it's not like it's in an economic boom. Nole is No. 1 in the world, so it gives the country something to be happy about."

Comments
Topics mentioned in this article
Novak Djokovic Tennis
Get the latest updates on IPL 2021, IPL Points Table , IPL Schedule 2021 , live score . Like us on Facebook or follow us on Twitter for more sports updates. You can also download the NDTV Cricket app for Android or iOS.