Novak Djokovic angrily blamed floodlights for dropping a tournament set for the first time as he beat Denis Shapovalov 6-3, 6-4, 4-6, 6-0. 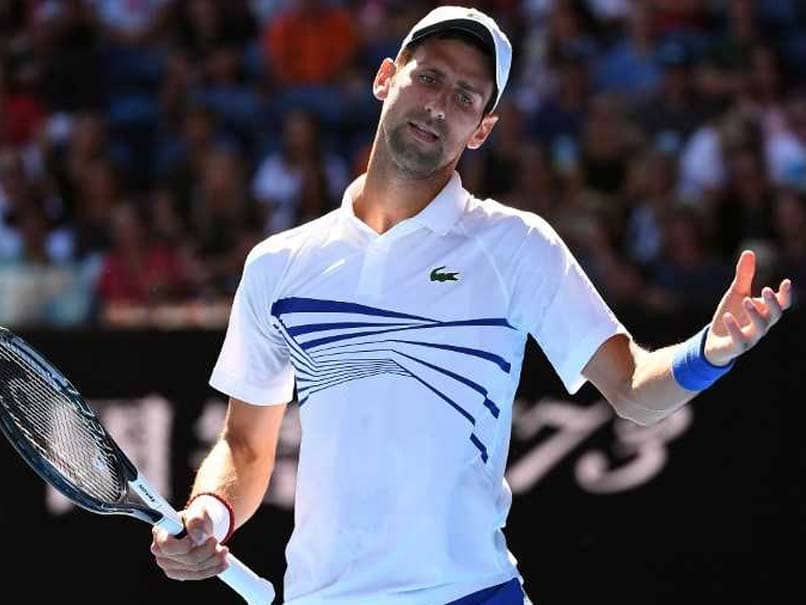 Novak Djokovic admitted he should have "known better" than to let a floodlight row get to him.© AFP

Top seed Novak Djokovic admitted he should have "known better" than to let a floodlight row get to him after copping a code violation during a mini-meltdown in the Australian Open 2019 on Saturday. The Serb angrily blamed floodlights for dropping a tournament set for the first time as he beat Denis Shapovalov 6-3, 6-4, 4-6, 6-0 in the third round. He seethed when leading 3-0 in the third set against the 25th-seeded Canadian when the powerful lights blazed on all around Rod Laver Arena -- in broad daylight.

An incandescent Djokovic lost his focus, swore towards a wise-cracking fan and dropped six of the next seven games as the red mist descended under bright sunshine.

"I think there was no sense to turn on lights on court at 5pm when we have another four hours of daylight," fumed the Serb 14-time Grand Slam winner.

"Completely unnecessary to turn on the lights. The explanation I got was for TV reasons. I hope the viewers enjoyed it," he added.

The normally mild-mannered Djokovic earned his warning from French umpire Damien Dumusois for snapping at a cheeky fan who shouted "Nervous?", as he faced three break points at 4-4, 0-40 in the third set.

"I misconducted myself verbally. That's why I got the code violation," a sheepish Djokovic told reporters after he had calmed down.

"It was very bright. There was no reason for the lights.

"For the first two sets, just had things under control. At 4-1 (up in the third set), I was agitated.

"As I said, should not happen to me. I know better. I have experience. But it does happen, I guess. I allowed him to come back to the match.

"Other than the little letdown that I had when I was 4-1, 4-2 up in the third set, other than that I thought I played well, especially in the fourth set."

Up till his mini-meltdown, Djokovic had made his outing on centre court look like an afternoon practice session for two-and-a-half sets against Shapovalov, one of the NextGen stars tipped to take over from the sport's old guard.

He skillfully dominated the 19-year-old, who could not find enough winners to throw the 14-time Grand Slam winner off his stride until the dazzling interruption to concentration.

"I expected Denis to come out and be aggressive. He made a lot of unforced errors, I thought, for the first set and a half," said Djokovic who extended his winning streak against left-handers at Grand Slams to 18 matches.

The last leftie to beat him at a major was Rafael Nadal in the final at Roland Garros in 2014.

Djokovic left the court at the end of the third set and came back refocused.

He unleashed a massive primal scream to relieve his tension as he broke for 2-0 before closing out the whirlwind last set in a match that lasted 2hr 22min.

"Making that break was crucial for me," said Djokovic. "It was important to start off the fourth set well."

Djokovic's victory means he is guaranteed to stay world number one when the new rankings are released after the tournament.