The changes were incorporated in the WSBK calendar released Wednesday. The 2013 season begins in Phillip Island, Australia. 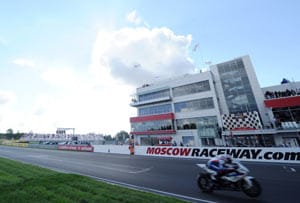 The inaugural India round of the Superbike World Championship (WSBK) has been shifted from March to November, citing lack of preparation time, world body for motorcycle racing FIM said.

The race, scheduled for March 10, will now be the season finale Nov 17 soon after the Formula 1 Oct 25-27 round at the Buddh International Circuit (BIC) in Greater Noida near here.

The organisers, Jaypee Group, welcomed the change on the WSBK calendar.

"It is good that we now get to host the season's final race right after the Formula 1 round so the buzz will be very much there. For the younger fans, a race in March could have clashed with their annual exams," the official told IANS.

The FIM statement said: "The World Superbike race in India has been moved from the March 10 to Nov 17 owing to insufficient time to train the marshals and medical staff."

The changes were incorporated in the WSBK calendar released Wednesday. The 2013 season begins in Phillip Island, Australia.

However, the visit of the FIM officials to the BIC later in the week will go on as planned.

"The FIM representatives will be at the track Jan 19, 20 and 21, to carry out the final homologation and deal with the relevant the different aspects of the event," the statement said.

Comments
Topics mentioned in this article
MS Dhoni Buddh Circuit Indian Grand Prix Other Sports
Get the latest updates on India vs South Africa and check out  Schedule, Results and Live Score. Like us on Facebook or follow us on Twitter for more sports updates. You can also download the NDTV Cricket app for Android or iOS.