Pardeep Narwal and Rohit Kumar were the star raiders for Patna Pirates in a lop-sided game against Puneri Paltan of the Pro Kabaddi League. U Mumba defeated Bengal Warriors in the other semifinal 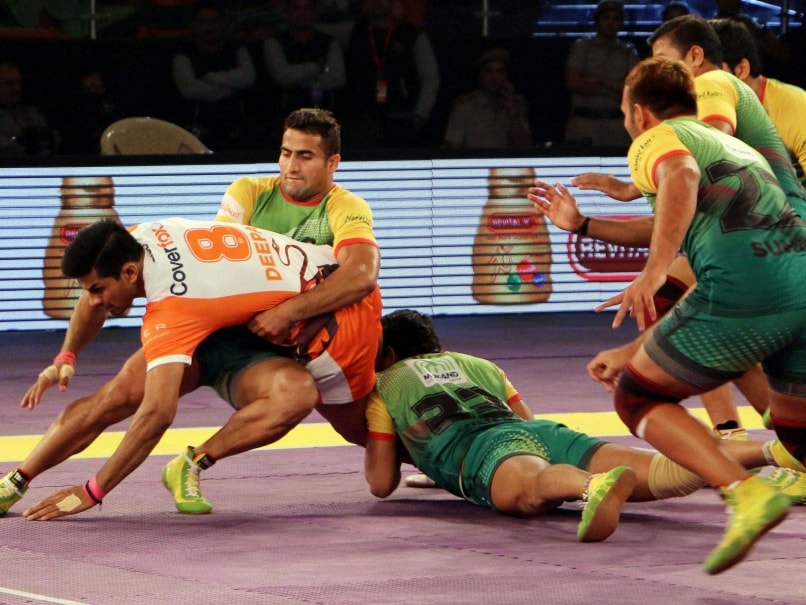 Riding on impressive shows by Pardeep Narwal and Rohit Kumar, Patna Pirates' routed Puneri Paltan 40-21, to enter the finals of the Pro Kabaddi League. (Read More in Other Sports)

Narwal and Kumar were the star raiders of the match but Patna Pirates' defence also joined the party to win a lop-sided match in the match.

The Pune side was all-out on three occasions in the match. The first two came in the first 12 minutes of the match.

The all-out assault launched by the Pirates was so severe that Puneri Paltan literally lost heart after they trailed 7-25 at the break. They did come back for a brief period in the second half to inflict an all-out on their rivals but that was all they could manage.

It all started with Pardeep Narwal targeting rival skipper Manjeet Chhillar with his first raid with a touch. It was Pardeep Narwal's guile versus the Puneri Paltan defence and every time he came up trumps in the first 15 minutes.

His 6-point super raid with four victims and two for the second all-out was the best show by a raider till date and more importantly it came at a crucial juncture.

As the Patna Pirates defence too started hacking the rival raiders one after the other the crowd was stunned and so was Puneri Paltan. They didn't realize what exactly hit them.

The match was almost over in the first half itself. Puneri Paltan seemed to have found out a way for a brief period as Manjeet Chhillar came up with three good tackles to arrest the top three from Patna Pirates -- Rohit Kumar, Pardeep Narwal and Manpreet Singh in a row. That led to the only all-out Puneri Paltan could inflict. But two successful do-or-die raids by Pardeep Narwal and Rohit Kumar brought the Patna Pirates side back on track.

A super ten for Pardeep Narwal before he was rested with a minor injury, seven to Rohit Kumar with a tackle point and in defence Sandeep Narwal (5), Vinod Kumar(4), Sunil (3) and D Suresh Kumar (2) showed the intent with which they subdued the rival attackers.

Puneri Paltan's attack was so toothless that it never bothered their rivals. Ajay Thakur scored his first point in the 32nd minute and that was his only raid point. Surendra Singh failed to open his account and Manjeet Chillar scoring just two speaks poorly of their attack.

In the other semifinal, defending champions U Mumba crushed Bengal Warriors 41-29.

It was the all-round show by U Mumba's Rishank Devadiga that gave them a third consecutive entry into the title round. Like the first semi-final this too was a one-sided affair with the Mumbai side racing ahead 26-8 ahead at the break.