The result equals Miguel Oliveira's best finish of his second season with the only Indian team on the grid. Oliveira had also finished fourth at the season opening Qatar Grand Prix. 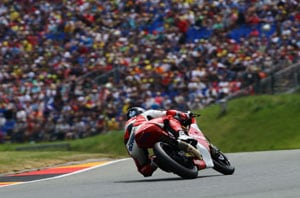 Mahindra Racing's Miguel Oliveira displayed all his skills to claim a resounding fourth place in an extremely close Moto3 Italian Grand Prix at the Mugello Circuit here on Sunday.

The result equals the Portuguese rider's best finish of his second season with the only Indian team on the grid. Oliveira had also finished fourth at the season opening Qatar Grand Prix.

The teenager started 19th and picked his way through a huge brawling group to finish a 10th of a second off the top-3 podium and a mere 0.121 seconds behind winner Romano Fenati of KTM.

However, teammate Arthur Sissis finished 17th. The Australian had qualified 24th but was delayed by slower riders as he moved through towards the top-15.

"It was such a hard race. I didn't start so well but felt good and started to recover some positions. The last lap was the key. I tried to get behind the group and save the tyres and in the end could make some positions," said Oliveira.

"In the last corner, I tried for more but it was very hard. I am very happy with the result and for the team after some disappointing races. This gives us more motivation to keep pushing. We have more potential than we showed at recent races. Today the bike allowed me to make the difference."

The next race is the Catalan GP to be held at the Circuit de Barcelona-Catalunya in two weeks' time.