Khelo India Youth Games: Haryana surged from sixth in the medals tally to the top spot after a day of domination. 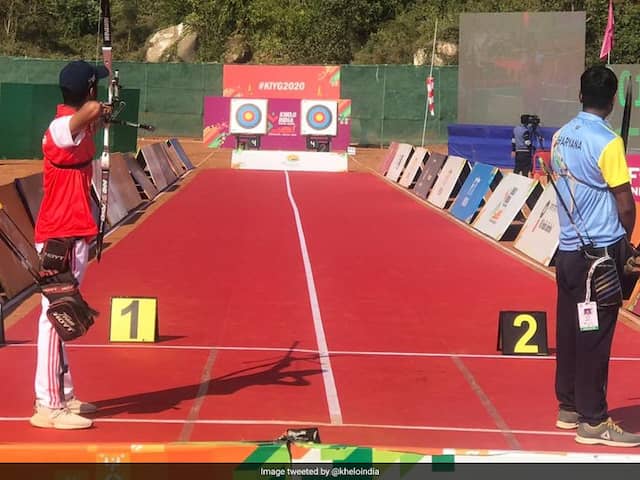 Haryana scooped as many as 12 gold medals on Day 4 of the Khelo India Youth Games in Guwahati on Monday to surge past Maharashtra to the top of the medal table. Pumped up by four golds in kabaddi, three each in archery and athletics and one each in cycling and gymnastics, Haryana amassed 17 golds after Day 4 to catapult from sixth to top spot. Maharashtra picked up only four golds on Monday for a total of 16 to slip to the second position. It has a total of 71 medals.

Defending champions Maharashtra were well served by U-21 gymnast Aditee Ajit Dandekar and their 4x100m relay quartet but they could only watch as Haryana went for the kill across sports.

Haryana dominated kabaddi but were surprisingly taken to the wire by Himachal Pradesh in the women's U-21 final. The hill state rallied from a six-point deficit at half-time to tie the scores at 27-27 at the end of regulation time.

Last year's runners-up Haryana had to dig deep into the reserves of their experience to sneak home in extra-time.

Meanwhile, Tamil Nadu stole the limelight in athletics, with an equally impressive five-gold show. Kerala's Ancy Sojan too made an impact, anchoring her state's U-21 4x100m relay squad to collect her third gold medal of the Games.

Three of Tamil Nadu's gold medals came in jumps, through S Saran (men's U-21 long jump), Pavithra (women's U-21 pole vault) and Babisha (women's U-21 triple jump). Their gold tally has swelled to seven from track and field, taking them to the fifth place with 8 golds out of 25 medals.

Delhi and Gujarat occupied the third and fourth spots.

Haryana dominated archery too, winning seven medals including 3 golds. Himani Kumari, who missed out on a medal in Pune last year, claimed the women's U-21 title with an easy win in the final.

Tisha Punia, a quarter-finalist last time, beat her team-mate Tamanna in the U-17 final while Ridhi took the bronze to ensure a sweep for them in this category.

Madhya Pradesh's compound archers Muskan Kirar (women's U-21) and Chirag Vidyarthi (boys U-17) bettered their last year's performances to bag gold medals this time. Chirag Vidyarthi had to hold his nerves in securing a 1-point win against Rajasthan's Rajesh Bishnoi.

Haryana cyclist Anil Manglaw secured the most comfortable victory in the road races held on Monday. Assam's Gongutri Bordoloi won the women''s U-21 road race (60km) in a stirring finish that saw the podium finishers separated only by 0.15 seconds.

Similarly, Delhi's Arshad Farid and Maharashtra's Pooja Danole outsprinted their rivals in the U-17 races but only just.

Gujarat's Rushiraj Jadeja, a student of the District Level Sports School in Ahmedabad, finished sixth in qualification but came into his own to win the boys U-21 10m air rifle gold from home favourite Hridhay Hazarika.

Rudraksh Patil (Maharashtra) took the other gold on offer in the shooting ranges on Monday, the 10m air rifle for boys U-17 with a consistent showing both in qualifying (627.2 points) and in the final where he beat Keval Prajapati (Gujarat) quite comfortably.

Gujarat's judokas showed their growing prowess on the mat to win three of the eight gold medals on offer in the U-21 competition. Seven of the state's 10 gold medals have come from the Judo competition.

While Gujarat's sustained efforts to rake in medals hogged the limelight, Mizoram's Chinglinmawaii caught attention by winning the women's U-21 52kg class for her state's second gold in all.