Sepp Blatter was an IOC member from 1999 to 2015. He is suspended from football for making a payment to Michel Platini. 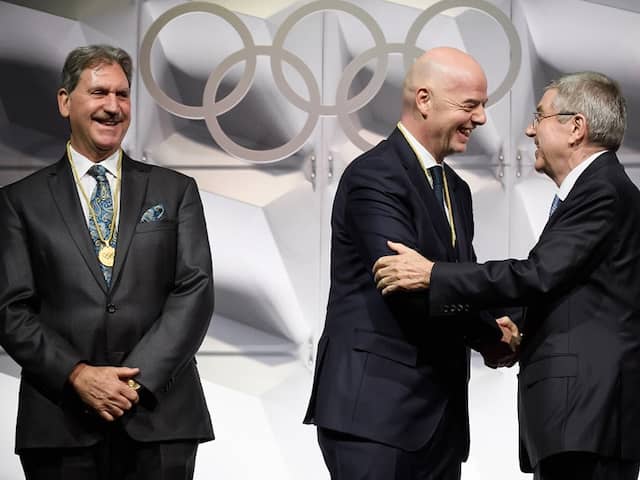 Gianni Infantino was one of three newcomers elected on to the International Olympic Committee.© AFP

Gianni Infantino was one of three newcomers elected on to the International Olympic Committee (IOC) on Friday and belatedly succeeded his predecessor as FIFA president Sepp Blatter. David Haggerty, an American who is President of the International Tennis Federation, and Yasuhiro Yamashita, President of the Japanese Olympic Committee and an Olympic judo champion in 1984 were also elected at the IOC session in Lausanne.

Infantino succeeded fellow Swiss Blatter when he became president of football's global governing body in February 2016 and was re-elected for a second term last June.

Blatter was an IOC member from 1999 to 2015. He is suspended from football for making a payment to Michel Platini.

Infantino's candidacy drew some resistance. Of the 79 IOC members entitled to vote, the 49-year-old received 63 votes. Thirteen members voted against and three abstained.

One name absent from the ballot was Englishman Sebastian Coe, head of World Athletics, which, like FIFA, traditionally has its president on the IOC.

IOC president Thomas Bach had already signalled because of "the risk of a conflict of interest," Coe would not stand.

"The door remains open for Sebastian Coe to join the IOC in Tokyo," Bach said. The IOC will meet again before the Olympics start in Japan in July.