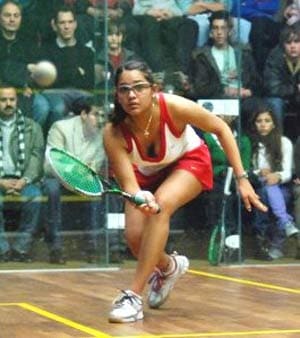 Indian squash star Dipika Pallikal played one of the best games of her life in the opening round of the Carol Weymuller Open where she recovered from two games down and saved a match-ball in the third to upset Australia's No.8 seed Kasey Brown and reach the quarter-finals of the Women's Squash Association (WSA) Gold 50 event celebrating its 40th anniversary at The Heights Casino in Brooklyn.

Pallikal, the 22-year old from Chennai, will next meet top seed and World No.1 Nicol David from Malaysia who won the title in 2005. The 30-year-old from Penang, eager to make up for a shock quarter-final exit last year, dispatched Australia's Donna Urquhart11-8, 11-5, 11-4.

In the third, Brown led 9-7 before reaching match-ball at 10-9, but was unable to convert it as Pallikal, ranked six places lower, dug in to take the game 13-11.

Pallikal took the fourth to set up a decider. The players traded points in the fifth until 9-9 and Kasey got a no let in the front backhand corner to take the Indian to 10-9 match ball. The Indian took her chance on the first attempt and went through to take the match.

"So I wanted to take advantage of being in the main draw. I came all the way to the USA for one tournament as I am playing in Macau, China, in a week's time.

"I had 3 months off tournaments this summer, so I trained with Sarah Fitz-Gerald in Australia, trained with Ritwik (Bhattacharya) in Mumbai and in Chennai with my fitness trainer Basu and I think it made the difference. I'm really thankful to Sarah as she has put a lot of effort in for me and she'll be really pleased that I won today!"

A disappointed Brown said: "I was 2-0 and had match ball in the third! I knew it was going to be tough and I think I went a little defensive in the third and fourth and in the end she was able to pull it out. She played well."