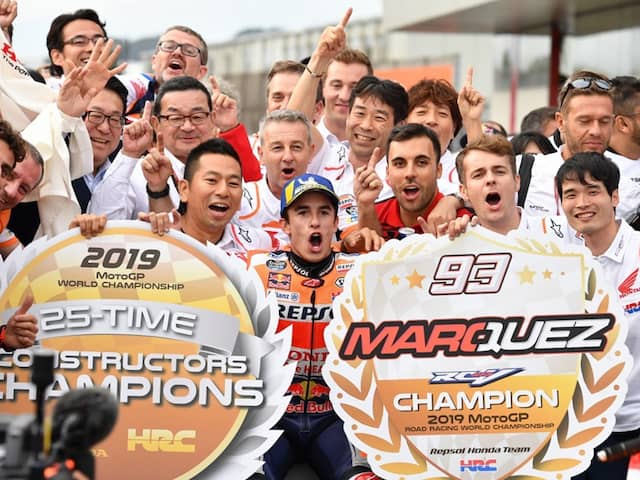 MotoGP world champion Marc Marquez won the Japan Grand Prix Sunday to notch his tenth victory of the season and earn Honda its fourth manufacturers' title running. The Spaniard ran the race in 42min 41.492sec, followed 0.870sec later by French rookie Fabio Quartararo of Yamaha-SRT and Ducati's Andrea Dovizioso 1.325sec later. Marquez was unassailable from the second lap in his first ever pole start at the Motegi Twin Circuit, with dry conditions after bucketing rains during practice sessions on Friday and Saturday.

Quartararo managed to edge in front for a brief moment shortly after the start, but Marquez quickly regained the lead and shot ahead with a one-second gap early in the race.

"It was not easy. I was pushing from the beginning because our strategy was clear," Marquez said.

"This time I tried to open the gap from the beginning because I felt very strong in the warm up."

He said he lost focus during the race when he realised his bike was burning through fuel too quickly, forcing him to "play a lot with switches".

But Marquez was never directly threatened and enjoyed a two second gap ahead of Quartararo through most of the second half.

He had already secured his season victory by winning the Thailand Grand Prix earlier this month.

His victory at Motegi also secured Honda's 25th constructors' championship overall and its fourth on the trot.

Quartararo finished with his third narrow defeat to the championship winner in recent races but was left smiling after winning the Rookie of the Year award.

"Marc was super fast today," the Frenchman said. "I really pushed at my 100 percent to try to stay with him."

He was also fending off pressure from Dovizioso, whose late charge fell just short.

"Dovi was unbelievably fast. He was riding more than a half second faster than me," Quartararo said.

Dovizioso, marking his 100th career podium finish, said he struggled to find his form until late in the race, where he could only compete for the possible second.

"I was pushing so hard, but it was a bit over the limit. I wanted to (win) second, but it was not enough," the Italian said.

"We struggled a bit during the weekend," he said.

Marquez said he was eager for next weekend's race in Australia, where he won in 2017 and 2015, but noted that Yamaha bikes tend to excel on the Phillip Island circuit.

"It's one of my favourite tracks. I enjoy a lot, riding there," Marquez said.

Dovizioso is currently second in the world standings but missed the chance to lock in a runner-up championship finish with three more races left in the season.