Watch: Novak Djokovic Smashes Racquet, Tosses One Away In Anger At Tokyo Olympics

Tokyo 2020: Novak Djokovic's frustration came to the fore during his defeat to Pablo Carreno Busta in the Tokyo Olympics. 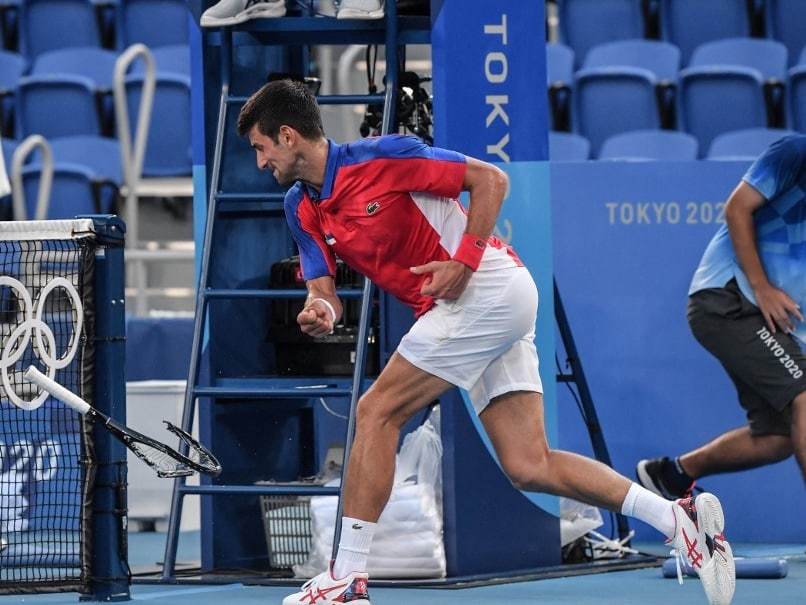 Tokyo 2020: Novak Djokovic smashes his racquet against the net post during his bronze medal match.© AFP

World No.1 men's tennis player Novak Djokovic had another frustrating outing at the Tokyo Olympics on Saturday as he went down in three sets to Spaniard Pablo Carreno Busta in the men's singles bronze medal match. Having lost two semi-finals on Friday - to Alexander Zverev in the men's singles event and to ROC's pair of Elena Vesnina and Aslan Karatsev in mixed doubles - Djokovic was hopeful of a bronze medal, but could not overcome Carreno Busta, who won 6-4, 6-7 (6/8), 6-3 against the Serbian.

Djokovic's frustration was there for all to see during the match as he smashed his racquet against the net pole in anger at one point and also flung it away into the stands in another occasion.

thats why djokovic will never be at the same level as federer or nadal
pic.twitter.com/Ou5E8oFbkA

If djokovic throwing and smashing his racquet in a third place match just for losing points isn't the lack of the Olympic spirit idk what is . Losing your shit does not suit a world champion. That's why he'll never reach Federer and Nadal's level.#TokyoOlympics2020 pic.twitter.com/mliSmPZYdz

"It was an emotional outburst and it happens," said Djokovic about the incidents. "You're tense on the court, in the heat of the battle.

"It's not the first time and it's not the last time probably. It's not nice, of course, but it's part of, I guess, who I am.

"I don't like doing these things, I'm sorry for sending this kind of message, but we're all human beings and sometimes it's hard to control."

After the match, Djokovic also pulled out of the mixed doubles final with a shoulder injury.

"I just didn't deliver yesterday and today," Djokovic said after his match against Carreno Busta.

"The level of tennis dropped, also due to exhaustion, mentally and physically," he said.

"I know that I will bounce back. I will try to keep going for Paris Olympic Games and fight for my country to win medals," insisted Djokovic.

Novak Djokovic Olympics
Get the latest updates on IPL 2021, check out the IPL 2021 Schedule and Indian Premier League Live Score . Like us on Facebook or follow us on Twitter for more sports updates. You can also download the NDTV Cricket app for Android or iOS.