With his silver medal at the Tokyo Olympics, Ravi Dahiya became the fifth Indian wrestler to win a medal at the Summer Games. 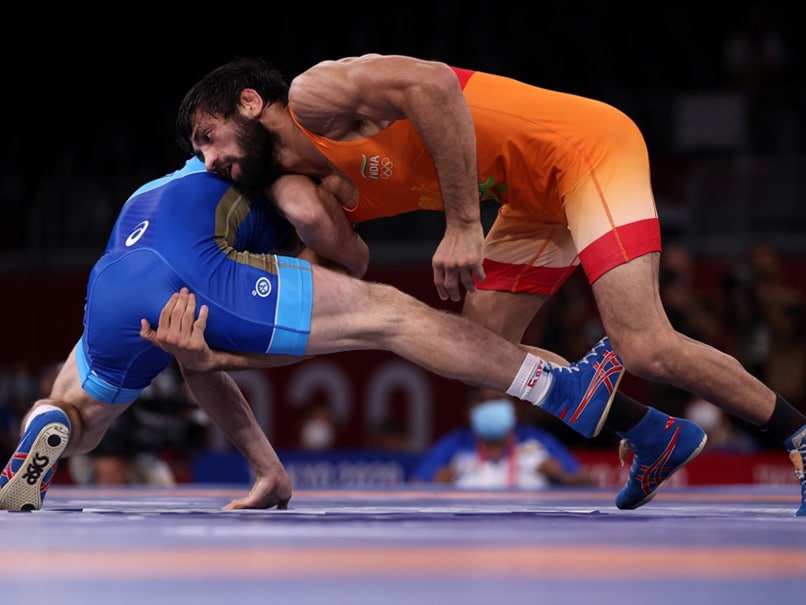 Ravi Dahiya lost to Zavur Uguev of ROC in the men's 57kg wrestling final at the Tokyo Olympics.© Getty Images

It was a bronze medal at the 2019 World Wrestling Championships in Nur-Sultan that catapulted Ravi Dahiya to the limelight in India. Dahiya had already established himself as one of the finest wrestlers in the country and he would follow up his performance in Nur-Sultan with gold medals at the Asian Championships in 2020 and 2021. The Haryana-born wrestler had been showing immense potential on the wrestling mat and had brought home a silver medal from the junior worlds in 2015.

In 2018, he secured a silver medal at the cadet worlds. Having headed to Tokyo as a medal hopeful, Dahiya delivered at the biggest stage of them all, becoming only the second Indian wrestler to reach a final at the Olympics. Despite his loss to ROC's Zavur Uguev in a tightly-contested 57kg freestyle final on Thursday, Dahiya matched Sushil Kumar's silver medal showing at the London Games in 2012.

The manner in which the 23-year-old Dahiya reached the final in Tokyo and brought home a silver is unlikely to be forgotten anytime soon. Having breezed through the round of 16 and quarterfinals with wins over Colombia's Oscar Tigreros (13-2) and Bulgaria's Georgi Vangelov (14-4), Dahiya seemed headed for a defeat in his semi-final clash against Kazakhstan's Nurislam Sanayev.

Trailing the bout 2-9 in the final round, Dahiya made a remarkable turnaround and reduced the deficit to 7-9 before pinning his opponent on the mat and securing victory by fall. In the final, he went down fighting 4-7 to two-time world champion Uguev.

Earlier this year in April, Dahiya returned to the mat to successfully to defend the Asian Championships title after being out of action for a year owing to the pandemic. After his Asian title, he added a silver medal to his kitty at the Poland Open, albeit in a different weight category (61kg).

The son of a small farmer in Nahari village of Haryana's Sonipat, Dahiya had trained at the Chhatrasal Stadium in Delhi from a very young age under the supervision of the renowned Satpal Singh, a recipient of the Padma Bhushan, Padma Shri, Dronacharya Award and Arjuna Award.

Comments
Topics mentioned in this article
Olympics 2020 India Wrestling Olympics
Get the latest updates on IPL 2021, check out the IPL 2021 Schedule and Indian Premier League Live Score . Like us on Facebook or follow us on Twitter for more sports updates. You can also download the NDTV Cricket app for Android or iOS.