Tokyo Olympics: PV Sindhu beat He Bing Jiao to win the women's singles bronze at the Tokyo Games and her coach revealed how he helped her stay calm in the big moments. 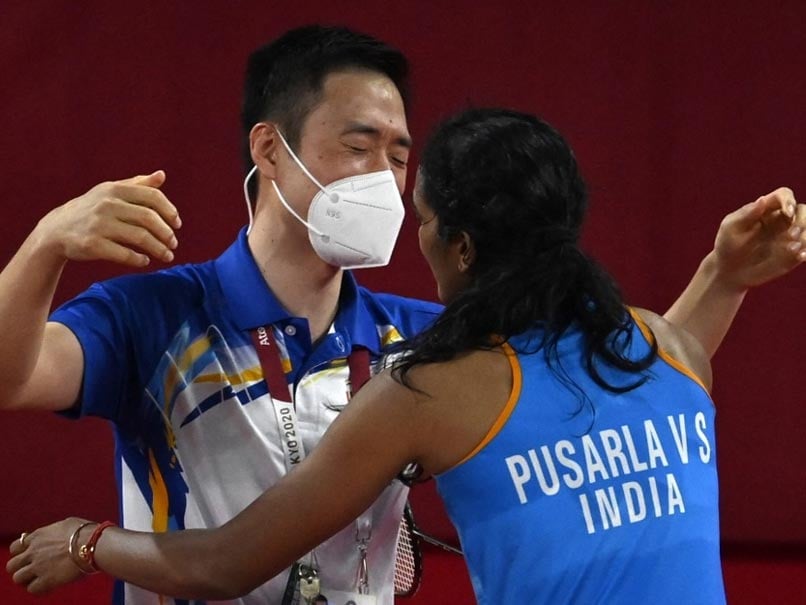 PV Sindhu's South Korean coach Park Tae-Sang revealed how he helps to ensure that the ace shuttler does not lose her focus in important moments on the court. Sindhu, on Sunday, beat China's He Bing Jiao in straight games to win the Tokyo Olympics women's singles bronze medal. Sindhu became the first Indian woman to win two individual medals at the Olympics, having added to her silver in Rio 2016. Speaking to the media on Monday, Park revealed his words of wisdom for Sindhu in high-pressure moments -- "aaram se".

"In important moments when she gets a point and the pressure is very high, the next shot or rally, it's very easy to make mistakes," Park said, while responding to a question from NDTV.

"So in important moments I tell her to calm down," he said, at which moment Sindhu promptly intervened to remind him that he says "aaram se" - the Hindi for 'take it easy.

Earlier, he said that he was happy about Sindhu's bronze, especially as she became the first player to win an Olympic medal under his training.

"Sindhu was already a big star when I started to train her. I said I would try to get Sindhu a gold medal. But bronze medal is also a big medal, so I am really happy," he said.

Sindhu was also full of praise for her coach.

"I have known coach Park for a very long time. When we started training together, it took us some time to get to know us. But we both had the dream to win an Olympic medal," she said.

"The efforts and hard work that he put in towards me is really great," she added.

She also credited him with motivating her after her semi-final defeat to Chinese Taipei's Tai Tzu Ying.

"Initially after the semis, I was really sad. I was in tears. But my coach said it's not over yet, there's another chance. So there were lots of mixed emotions," she said.

"But coach Park said one thing that I remember that there is a big difference between getting a bronze and the fourth position. So that really hit me. To win a medal for your country at the Olympics is definitely a proud moment," she said before adding that it pushed her to give her best in the bronze medal match.

PV Sindhu Olympics
Get the latest updates on IPL 2021, check out the IPL 2021 Schedule and Indian Premier League Live Score . Like us on Facebook or follow us on Twitter for more sports updates. You can also download the NDTV Cricket app for Android or iOS.