Stateless refugee Guor Marial will compete in Sunday's men's marathon under the Olympic flag, while his family in South Sudan will trudge 50 kilometres to watch him on the nearest television. 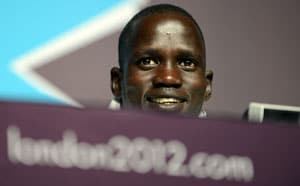 Stateless refugee Guor Marial will compete in Sunday's men's marathon under the Olympic flag, while his family in South Sudan will trudge 50 kilometres to watch him on the nearest television.

The 28-year-old has not seen his relatives since fleeing as a child in 1993 -- when the only time he ever ran was to save his life.

But they will try to pick him out, in his one-off Olympic kit, among the 109 marathon runners pounding the streets around central London's world-famous landmarks.

Marial was born in what was then a what was then a war-torn part of Sudan. He fled to Egypt and then the United States after 28 members of his family were killed in the conflict. He has a US resident's permit but no passport.

Although South Sudan achieved independence last year, it does not yet have a national Olympic committee, and in any case, Marial has no passport.

He found out just a week before the Games that he could compete under the rare Independent Olympic Athlete (IOA) label.

"I feel so fortunate to be here," he told reporters Friday.

"I wanted to take this opportunity to raise awareness of refugees all around the world and all people who do not have a country. And the people of South Sudan especially.

Marial arrived in the United States on July 19, 2001, settling in New Hampshire, and now lives in Flagstaff, Arizona, where he largely trains alone.

Back in South Sudan, his family have no electricity so will walk to the city of Panrieng to see how he gets on in London.

"They will be watching me on TV. The nearest city is about 30 miles. At the moment in South Sudan it's the rainy season so there's no vehicle," he said.

"There's no official road where a car or vehicle can go to the village so they will walk.

"I love them so much and I'm here for them.

"I hope the young generation in South Sudan will see me and they will dream high for the next period to come, they will work hard and say 'we can also get a chance in the Olympic Games'."

When he was living in a refugee camp, and later in New Hampshire, running was the last thing Marial wanted to do, because he associated it with fear.

"Growing up in the war, it was dangerous and it was hard. It was survival of the fittest," he said.

"When my teacher told me to start running, it took a couple of months to convince me. Running is something I used to do to escape, to save my life."

Marial is being assisted by lawyer Brad Poore, whom he met at a marathon last October. Seeing his impressive times -- his fastest is 2hr 12min 55sec, good enough to qualify for the Games -- Poore took up his case.

After the lawyer lobbied hard, the International Olympic Committee (IOC) gave him a place at London 2012. There are three other IOAs at these Olympics, all from the former Netherlands Antilles.

Out of gratitude, Marial said any medal he won would be for the IOC before South Sudan.

"Right now I am an athlete for the IOC and not for any country," he said.

Besides his place, the IOC has also fixed him up with a new pair of racing shoes and some kit including a plain white jacket with the Olympic rings and IOA on the right arm.

He is enjoying his time in the athletes' village, and was thrilled to meet Usain Bolt and Kenya's 800m gold medallist David Rudisha.

"It's great. You see Usain Bolt walking, talking. I took a couple of photos," he said.

"It's incredible to see them and it's given me motivation and confidence."

When other athletes see him in the village, they ask him about his Olympic jacket, and he tells them his extraordinary tale.

"It's hard for people to understand how it's possible," he admitted.

One day, he would like to return to South Sudan.

"If everything goes well I will probably go visit," he said.

"My family want to see me eventually, and I want to see them, too. It's been a long time."

Comments
Topics mentioned in this article
Athletics Olympics 2012
Get the latest updates on Olympics 2020, Olympics 2020 Medal Tally, Live Cricket Score . Like us on Facebook or follow us on Twitter for more sports updates. You can also download the NDTV Cricket app for Android or iOS.