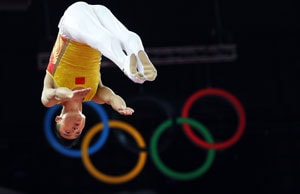 But ask not for whom Dong Dong tolls, he tolls for thee.

Soaring 10 metres into the air and making triple somersaults with twisting front and back flips, the springy high-fliers of the Olympics defy gravity with each bounce while judges grade them on flight time as well as acrobatic moves.

China's Dong, the name so nice he has it twice, exited after competing to the song "Jump" by Van Halen and left the medal podium to "Jumpin' Jack Flash" by the Rolling Stones, a wink and nod from the Olympics to a packed arena.

Mandy Lomax brought her eight-year-old son Joseph to watch, finally getting tickets only three days before the event after trying for months.

Joseph began jumping on the family trampoline in the garden three years ago and now bounces twice a week at a trampoline academy in Northampton.

It's an intense atmosphere when trampolinists perform, so silent you can hear the "boing, boing, boing" of the apparatus springs and the whistle sound as they quickly exhale at the height of their somersault so they can inhale on the downward plunge to be ready for the next effort.

Gravity is over-rated in a sport that can seem silly and dangerous all in the same moment, a combination of elegance and grace with power and precision.

American George Nissen invented the sport in the 1930s, trademarking his apparatus from the spanish word for springboard.

Ramona and Neil Vinsant, parents of US Olympic trampolinist Savannah Vinsant, were among the first in the arena. Their daughter discovered the sport at age eight, sneaking out of tumbling class to hang out with a bouncier crowd.

"It's artistic on steroids," Ramona Vinsant said. "You enjoy watching everybody. You know what it took each one of them to get here."

When a coach asked a 10-year-old Savannah if she wanted to be an Olympian, the idea stuck. Now she wants to see more people get hooked on trampoline.

"Once they see how beuatiful the sport is, they will be coming back," she said.

"You combine a lot of power with a lot of grace," her father said. "The big difference (from other sports) is you get one shot at this."

Four years of work can end in seconds, as it did in the final for Canada's Jason Burnett, the 2008 Olympic silver medallist and lead actor Michael Cera's stunt double in the film "Scott Pilgrim vs. the World".

Burnett came down with his leg too near the springs at the edge of the mat and went through, leaving him to take a nasty tumble onto the trampoline mat. Spotters with big handheld mats saved a handful of others during qualifying.

American Hunter Brewster, 17, has competed around the world and dreams of the 2016 Olympics in a sport he began by jumping on king size beds at age three.

"They had this TV show I watched, Power Rangers. They did these awesome flips," Brewster said. "I saw that and I knew I wanted to get into it.

"Once people see trampoline, it's so exciting they always come back."

Well, his pal Jesse Glenn, an artistic gymnast, might not.

"He got scared," Brewster said. "He said, 'I get the shivers just seeing that.'"

Comments
Topics mentioned in this article
Gymnastics Olympics 2012 Manchester United
Get the latest updates on IPL 2021, IPL Points Table , IPL Schedule 2021 , live score . Like us on Facebook or follow us on Twitter for more sports updates. You can also download the NDTV Cricket app for Android or iOS.