Gymnastics reaches out to new horizons 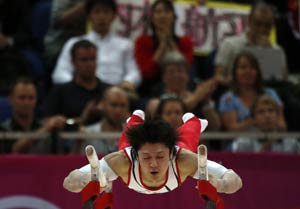 Brazil and South Korea both claimed their first ever Olympic gymnastics gold medals, while the Netherlands ended an 84-year wait for gold in the gymnasium and Great Britain enjoyed their most successful Games ever.

Arthur Zanetti of Brazil could be poised to become a star on home turf in Rio, where he will attempt to defend the title he snatched from Chinese defending champion Chen Yibing in the men's ring final.

"I hope this medal will open lots of doors for all the gymnasts in Brazil," he said. "I hope that in Rio we'll be able to have a full team, in order to defend this title and fight for others on home soil."

Zanetti, 22, is Brazil's first ever Olympic gymnastics medallist, and he was one of a number of pioneers in the men's event.

Hosts Britain provided the crowd at the North Greenwich Arena with several unforgettable moments and finished with four medals -- more than any other nation except for traditional powerhouses Russia, China and the United States.

Comments
Topics mentioned in this article
Gymnastics Olympics 2012
Get the latest updates on IPL 2021, IPL Points Table , IPL Schedule 2021 , live score . Like us on Facebook or follow us on Twitter for more sports updates. You can also download the NDTV Cricket app for Android or iOS.