It was Rohit Sharma's 89 that took India to a competitive 176 for three in 20 overs and then Washington Sundar (3/22) blew away Bangladesh. 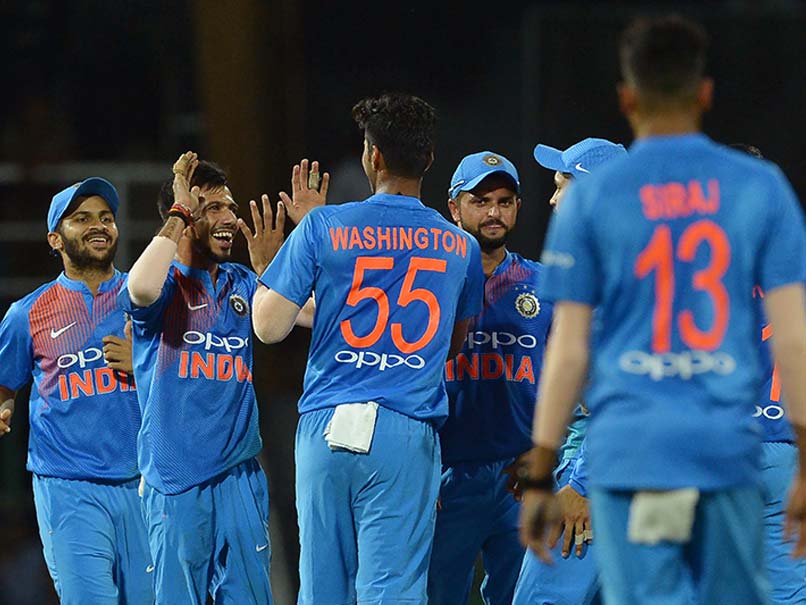 Rohit Sharma played a captain's knock as India outclassed Bangladesh by 17 runs to cruise to the final of the Nidahas T20 tri-series on Wednesday. It was Rohit's 89 off 61 balls that took India to a competitive 176 for three in 20 overs and then young Washington Sundar (3/22 in 4 overs) blew away the top-order to help restrict Bangladesh to 159 for six in 20 overs. Bangladesh's inconsistency once again proved to be their bane as they found a target of 177 too hot to handle, having chased 215 in their previous encounter. The ever dangerous Tamim Iqbal (27 off 19 balls) started on a promising note, hitting three boundaries and a six off a Shardul Thakur over.

Teenager Washington's flatter trajectory paid him rich dividends as Iqbal was bowled trying to scoop another angular delivery over short fine leg. The left-hander failed to get elevation as it clipped the leg-bail.

Skipper Mahmudullah (11) was guilty of squandering a half-tracker when he pulled one from Yuzvendra Chahal (1/21 in 4 overs) straight into deep mid-wicket fielder KL Rahul's hands.

The 26 dot balls bowled by the spinner (13 each by Washington and Chahal) proved to be decisive in the end.

Even though Mushfiqur Rahim (72 no off 55 balls) fought well with some big shots, the match as a contest was over when Shardul (1/37 in 4 overs) managed to castle Sabbir Rahaman (27) after 65-run partnership for the fifth wicket.

Shardul could be credited for making a good comeback in his last three overs executing knuckle ball with considerable success.

Earlier, Rohit roared back to form with a blazing knock as India were able to put up a fighting total.

After a prolonged bad patch starting from the tour of South Africa, the stand-in captain was in his element, starting cautiously before finishing with a flourish as he hit five fours and an equal number of sixes off only 61 balls.

With another senior pro Suresh Raina (47 off 30 balls) for company, Rohit added 102 runs for the second wicket in only 9.2 overs.

The two veterans of numerous IPL battles, shifted gears in the four overs between 16 to 19, in which India scored 55 runs. The final over was a bit of an anti-climax with Bangladesh's best bowler Rubel Hossain (2/27 in 4 overs) keeping things tight and giving away only four runs.

The turning point was the 18th over bowled by left-arm military medium bowler Abu Hider Rony (0/43 in 4 overs), which fetched India 21 runs.

Rony was hit for three sixes --- two by Rohit and one by Raina, which suddenly propped up India's score that was looking below par at one stage.

Of the sixes hit by the Indian skipper, the standout was a slog sweep off Mustafizur Rahaman. He also punished the slower bowlers -- off-spinner Mehidy Hasan Miraz and left-arm spinner Nazmul Islam -- hitting them for a six each.

When Mustafizur (0/38 in 4 overs), while trying for the slower one, ended up bowling full tosses, Rohit opened the bat face to fetch boundaries in the arc between point and third man.

While Rohit upped the ante in the end, Raina once again played a significant role, hitting five boundaries and two sixes.

Raina missed out on a half-century as another attempted flick over deep mid-wicket off Rubel was taken by Soumya Sarkar.

India had their best start of the tournament with Shikhar Dhawan (35 off 27 balls) and Rohit adding 70 in 9.5 overs.

Dhawan hit Mustafizur for a six over long on, picking a slower delivery earlier than expected.

Dhawan was bowled by a yorker from Rubel, which uprooted the middle stump.

Comments
Topics mentioned in this article
Bangladesh Cricket Team India Cricket Team Nidahas T20 Tri-Series Rohit Sharma Yuzvendra Chahal Mushfiqur Rahim Washington Sundar Cricket
Get the latest updates on India vs England Series, India vs England , live score and IPL 2021 Auction . Like us on Facebook or follow us on Twitter for more sports updates. You can also download the NDTV Cricket app for Android or iOS.