New Zealand vs India: Ross Taylor, after losing the first T20I, lamented that their bowlers didn't put enough pressure on the Indian batsmen. 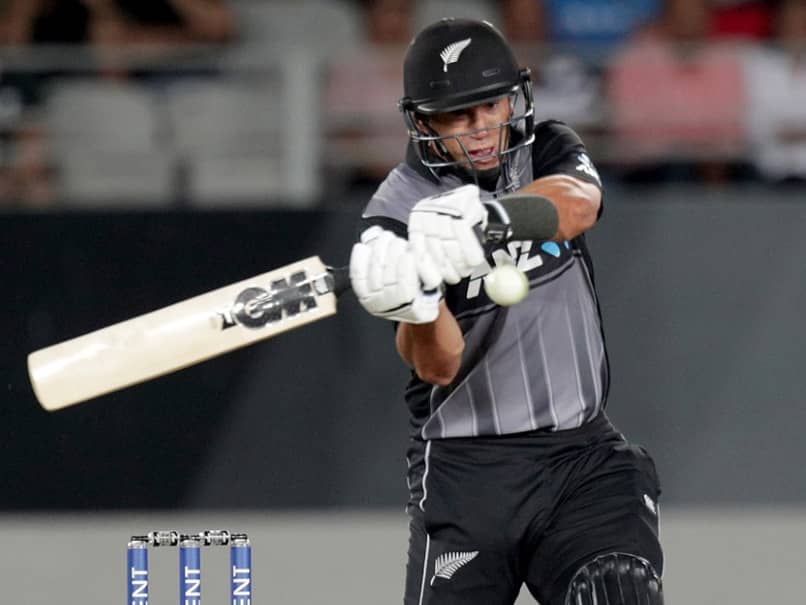 New Zealand's Ross Taylor on Friday lamented that their bowlers didn't put enough pressure on the Indian batsmen in the first T20 International, held at a ground with odd dimensions. Shreyas Iyer's second T20 half-century powered the visitors to a six-wicket win, completing a stiff chase of 204 with an over to spare. Taylor said that the hosts were probably 10-15 runs short on a batting beauty at Eden Park, but failed with extras and lack of pressure on the Indian middle order.

"It is hard to tell at Eden Park. In the last three overs India bowled well and we didn't get a big over. We still did get 100 in the last 10 overs to put pressure on them but it's always hard to gauge," Taylor said.

"We bowled well but sometimes have to give credit to how batsmen are. In T20s you have to learn quick and we have to adapt. Our bowlers will have to look at them and at the same time their batsmen are a class line-up all the way through.

Colin Munro and Kane Williamson scored attacking half centuries before Taylor made his first T20I half-century in six years to propel New Zealand to 203/5.

The batsman appreciated the base set earlier but said the middle order didn't generate enough momentum in the last few overs.

"A lot of times when you play at Eden Park wind is a factor and you are able to attack from both ends. It was hard to know what a good total is. They won with an over to spare so we were definitely 10-15 runs short."

"What they did better was we lost couple of wickets in crucial stages and the new batsmen were not able to get the momentum or rotate strike.

"In India's batting, we were not able to get those quick dots and get the rate up to put them under pressure at 10-11 (per over). We were stuck at nine and a half for a long time (and couldn't restrict them) and on Eden Park batsmen always feel comfortable," he said.

Taylor also spoke about the difference Jasprit Bumrah's experience made in the death overs.

"He has been a class bowler for a long time and one of the best death bowlers going around. He has a potent slow ball, and that extra pace, so you have to adapt to both the slower and quicker ball.

"He showed us what to expect and we need to learn quickly and play their bowlers slightly better," he said.

The Eden Park wicket and ground came under scrutiny as bowlers from both sides suffered in the first T20.

Taylor said that the ground's dimensions adds an unpredictable factor to the game and added that both teams must adapt before Sunday's second game here.

"On a good wicket you can clear the boundaries with ease. Eden Park definitely adds a new dimension and what we have learnt is that in two games in a row it slows up a little bit.

"We just have to wait and see, and adapt, if there will be any dew. Eden Park is not the easiest ground to field with such low lights."

Taylor praised the way India went about their task. "They ran between the wickets fantastically well and sometimes touring teams can take a little time to get used to things here. But the way they played, last year they learnt playing on these grounds and adapted a lot quicker than they did last year," he said.

Iyer and Manish Pandey came together after the dismissal of both KL Rahul and Virat Kohli, but were able to resist the pressure situation.

Taylor said their bowlers needed to learn and adapt better as Iyer showed what he is capable of doing in the middle despite his relative inexperience.

"He (Iyer) is not very experienced in international cricket, but in a pressure situation made it look easy with some of those boundaries. If he had got out, then a new batsman coming in and couple of dots would have made the run rate up," Taylor signed off.

Eden Park, Auckland New Zealand vs India, 2020
Get the latest updates on IPL 2020, check out the IPL Schedule for 2020 and Indian Premier League (IPL) Cricket live score . Like us on Facebook or follow us on Twitter for more sports updates. You can also download the NDTV Cricket app for Android or iOS.