Virat Kohli, Mohammed Shami and Prithvi Shaw all can be seen making weird facial gestures in his latest tweet. 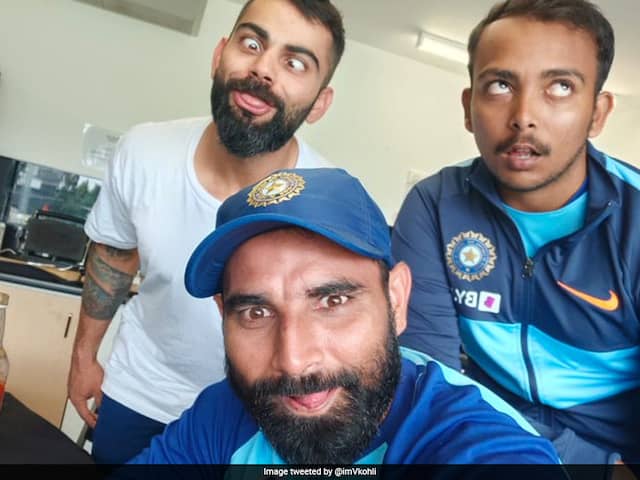 Virat Kohli, who is currently in New Zealand, tweeted a picture with two of his teammates fast bowler Mohammed Shami and young opener Prithvi Shaw on Sunday. When away from field, Virat Kohli always shares pictures with his followers on various social media accounts. Kohli's fans always scroll through his social media handles looking for any updates and the Indian skipper also obliges them by uploading pictures and videos on the internet. However, the latest picture Kohli posted on Twitter was not a normal one as it featured all three of them making weird facial gestures. "Naya post Sundar dost," Kohli captioned the picture.

As soon as the hilarious post went online, fans turned it into a meme fest in no time.

Reacting to the post, a fan wrote: "Next meme material", while the other replied, "Meme walo: wah pic mil gaya!".

After seeing this pic babu bhaiya be like pic.twitter.com/Oi6YtqTP2q

India's next assignment is a two-Test series against New Zealand, first of which will be played at Basin Reserve, Wellington from February 21-24.

The series will be part of the ICC World Test Championship and India, having won all their previous seven matches, are sitting on the top of the points table, while New Zealand are on sixth position with  60 points to their name after just one win from five matches.

India began the tour on a strong note as they became the first team in the history to complete a 5-0 whitewash in a Twenty 20 International (T20I) series.

The visitors, however, go into the Test series after suffering a 3-0 whitewash in the One-day International series and would look to bounce back by putting up a better show in game's longest format and consolidate their position on top of the test Championship points table.

Mohammed Shami Prithvi Shaw New Zealand vs India, 2020 Cricket
Get the latest Cricket news, check out the India cricket schedule, Cricket live score . Like us on Facebook or follow us on Twitter for more sports updates. You can also download the NDTV Cricket app for Android or iOS.