Adam Silver, Commissioner of the NBA, handed over the basketball to Nita Ambani and she passed it on to the officials to kick-start the game. 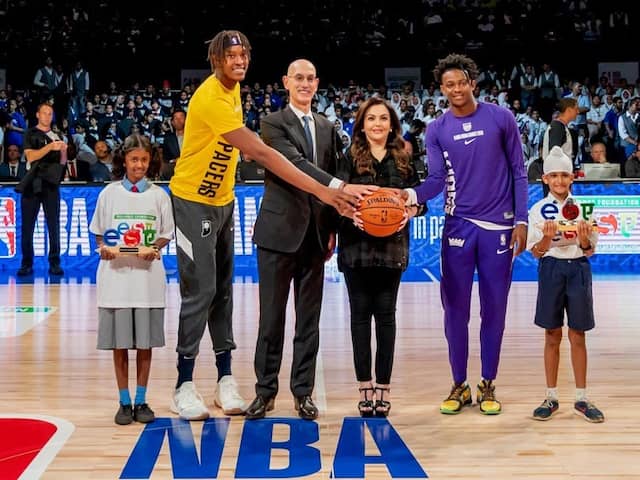 The first-ever NBA game to be played in India is currently underway at NSCI stadium in Mumbai's Worli. Nita Ambani, the chairperson of Reliance Foundation, presented the ceremonial "match ball" to NBA officials, ahead of the game between Indiana Pacers and Sacramento Kings. The teams are in India to play two pre-season games on Friday and Saturday. NBA Commissioner Adam Silver presented the "first" Match Ball to Nita Ambani as a symbol of NBA coming to India. Nita Ambani and Adam Silver were joined by players, Myles Turner of Indiana Pacers and De'Aaron Fox of Sacramento Kings, to hand over the Match Ball to NBA game officials symbolizing the start of the first NBA game in India.

At the press conference ahead of the match, Silver said that the NBA is giving "serious consideration to the launch of a league" in India.

Moreover, Sacramento Kings owner Vivek Ranadive has had talks with Silver about the formation of a 12-team league in India that would follow in the footsteps of Basketball Africa League, which will begin its inaugural season in March 2020.

"Reliance Foundation is proud to bring the NBA to India and present these children with a fantastic opportunity to witness the magic live at the stadium. It has been a deeply fulfilling journey in our partnership with the NBA. I would like to thank the NBA for believing in Indian basketball and for being a great partner on this incredible journey," Nita Ambani had said in an official statement on Friday.

"India is rising as a major player across multiple sports. We are the youngest nation in the world with over 600 million Indians under the age of 25 years, and I strongly believe that the future of Indian sport is bright, brilliant and beautiful," she added.

Comments
Topics mentioned in this article
Sacramento Kings Indiana Pacers NBA
Get the latest Cricket news, check out the India cricket schedule, Cricket live score . Like us on Facebook or follow us on Twitter for more sports updates. You can also download the NDTV Cricket app for Android or iOS.