UP Yoddha secured a 35-33 victory in an edge-of-the-seat thriller at the EKA Arena by TransStadia in Ahmedabad. 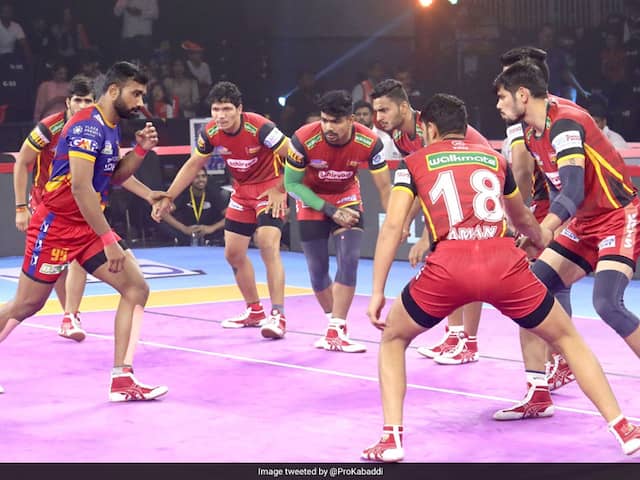 Pawan Sehrawat put in a brilliant all-round performance for UP Yoddha.© Twitter

UP Yoddha put in a disciplined performance against Bengaluru Bulls to secure a 35-33 victory in an edge-of-the-seat thriller in the Pro Kabaddi League season seven in Ahmedabad on Monday. Pawan Sehrawat put in a brilliant all-round performance for side, scoring a Super 10 and also picking up three tackle points. However, Sumits High 5 combined with Monu Goyat and Shrikant Jadhavs effective raiding helped UP Yoddha stay ahead in the contest. In the other match, Bengal Warriors and Telugu Titans played out a 29-29 tie. This was the fifth tie between these two sides, making this the most tied fixture in the history of Pro Kabaddi.

Bengaluru Bulls raced away to a 6-1 lead just three minutes into the match thanks to Pawa Sehrawat, who scored five of those first six points. Monu Goyat, though, responded in style, first picking up two points through a Super Tackle and then putting in a two-point raid to bring the score difference down to just one.

The game stayed close from that point on but Goyat and Shrikant Jadhav picked up a touch point each in consecutive raids to reduce Bengaluru Bulls down to two men on the mat. Jadhav then got a touch on Amit Sheoran before UP Yoddha tackled the last man, Pawan, to inflict the first All-Out of the match on Bengaluru Bulls, levelling the scores.

Aman and Rohit Kumar then picked up a point each before the U.P. Yoddha defenders tackled down both key raiders Rohit and Pawan in consecutive raids to ensure that the teams went into the break level at 15-15 but with U.P. Yoddha having more players on the mat.

Pawan Sehrawat scored another Super 10 against UP Yoddha

The second half started slow, with both teams playing on the Do-or-Die raid. Bengaluru Bulls succeeded in the first sequence of Do-or-Die raids, getting two points but UP Yoddha proved successful in the next two as the scores remained close. Ashu'Singh's successful tackle to send Pawan to the bench was then followed by a successful Shrikant Jadhav do-or-die raid as UP Yoddha started to get in front.

Goyat then came to the fore for his team, picking up two successive touch points before Jadhav put in a successful tackle on Rohit to inflict another All-Out on Bengaluru Bulls, giving UP Yoddha a six-point advantage with nine minutes left in the contest.

Pawan then went on a spree of successful raids to reduce the deficit to four points, reaching his Super 10 in the process. His two-point raid with five minutes left in the match, followed by Sheoran's tackle on Jadhav gave Bengaluru Bulls some momentum, before UP Yoddha skipper Nitesh Kumar ensured that his team stayed ahead with two tackle points in quick succession.

Rohit made it a one-point game in the penultimate raid of the contest but Jadhav kept his nerve and scored a point against a high-line Bengaluru Bulls defence in the final raid to give UP Yoddha a narrow win.