Neeraj Kumar scored joint most tackle points in the 1st half by a player in PKL. 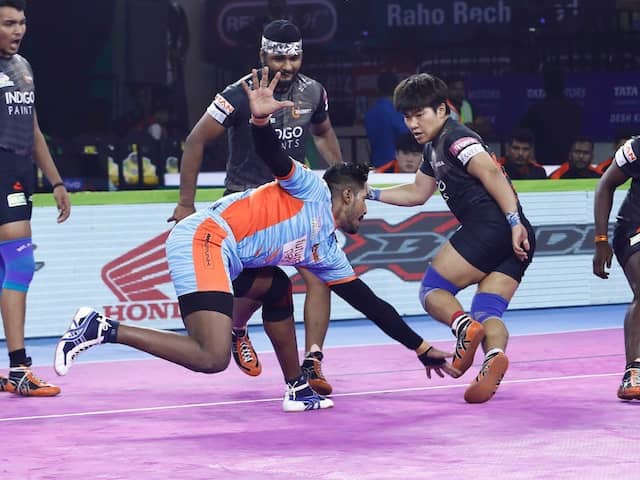 Baldev Singh got a High 5 for the Bengal Warriors.© PKL

Bengal Warriors got the better of U Mumba by a 32-30 scoreline at the Patliputra Indoor Stadium in Patna on Friday. In the other match of the day, Patna Pirates thrashed UP Yoddha 41-20 as Neeraj Kumar scored joint most tackle points in the 1st half by a player in PKL. Baldev Singh got a High 5 for the Bengal Warriors, while Arjun Deshwal scored a fighting Super 10 for U Mumba. U Mumba began the match with a successful tackle by Surinder Singh and followed it up with a successful raid by Deshwal to move into a quick 2-0 lead. They enjoyed the better of the opening exchanges with both their defence and raiders firing.

U Mumba eventually enforced the first all-out of the game on Bengal Warriors in the 11th minute to take a 12-5 lead. Bengal Warriors looked to forge a comeback immediately after the All-Out, but it was their defence that was proving to be their main source of points with the raiders finding it difficult against U Mumba's defenders.

Despite managing to chip away at U Mumba's lead, Bengal Warriors still trailed 11-16 going into the break. Bengal Warriors started the second period in rollicking fashion courtesy of Prapanjan's three-point Super Raid.

Just three minutes later, they went on to enforce an All-Out on U Mumba and took a narrow 18-17 lead. U Mumba, though, wrestled back the initiative after a two-point raid by Deshwal, who had been finding success all night.

Deshwal picked up his Super 10 near the half-hour mark after another two-point raid that enforced a second All-Out on Bengal Warriors and gave U Mumba a 26-20 lead.

Bengal Warriors began to claw away at U Mumba's lead again and brought it down to two points to set up a nervy last five minutes. Their defence and Baldev, in particular, seemed to be thriving under pressure as they reduced the deficit to just one point with a little more than four minutes to play.

Successive successful raids by Mohammad Nabibakhsh then gave Bengal Warriors the lead and set up a second All-Out on U Mumba. With a three-point lead at 31-28 to protect in the last three minutes, Bengal Warriors looked to run down the clock.